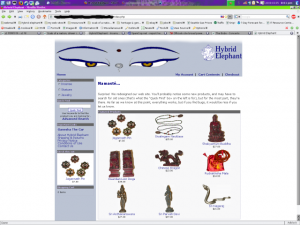 okay, i’m getting really excited now. after what seems like years of not getting anywhere, i’m finally coming down to the last stretch of work on the new site. i’ve still got some products to add to the database, i’ve still got a few things that need tweeking, and i still need to add a whole bunch of content, but i have a fair idea of where that’s coming from and a fairly good idea of how to incorporate it into the site without too much difficulty. there’s still an annoying difficulty, which is that when i put the “ganesha” directory anywhere in the new site, for some reason (including permissions, which i have already checked and they’re all set correctly), the contents of the directory don’t show up, and links to within the “ganesha” directory come back as “403 Forbidden” which is exceedingly strange. furthermore, when i link to where the “ganesha” directory currently lives, there’s no problem, but i get the impression that it can’t stay that way, because when i “move” the domain from the old site to the new site, everything that’s where the old site currently is will be two directories in back of the root directory, and while i can develop that way, i’m about 50% sure that domain-forwarding will make it impossible in real life. i’m not worried, though. things will work out, as always.

ganesha the car got a tune up for the first time in 3 years today. it was close to $400, but the guy took off almost $100 of that because i paid in cash, and because i’m going to make him more business cards. he’s also got a flyer that i’m going to design and (probably) print as well. it was really strange, because i dropped off ganesha the car yesterday and he gave me a ride home in his huge-ass black cadillac with a license plate that says “CHR1ST”. this is the guy who, when i showed up wearing my “it’s just a vegetable” shirt, gave me evil looks all afternoon. i guess he’s willing to look askance at my propensity to sacrifice the Holy Vegetable when it means that he’s going to get kick-ass business cards.

i got a call from "the attorney" the other day, about the notice i received. he said there is nothing to worry about – like i believe that, especially coming from an attorney 8/ – but it was good to hear him say it if nothing else. he said that we’re one to two months out from "the hearing", and he needs to collect updates from me, and various other folks.