Alexander Shulgin — even though i never understood more than about 25% of what it contained, i own a copy of PIHKAL and have read most of it…

French composer André Popp dies, age 90 — André Popp wrote the music for one of my all-time favourite albums, The Adventures of Piccolo, Saxie and Company (i actually have a vinyl copy of that album!). another reason why i chose music as a career…

Pete Seeger — i met pete seeger when i was 3 years old (in other words, i don’t remember him at all), and my friend rob went to visit him when i was 20 or so… it was about time that he died, but it still sucks. 😮

so the anniversary of andy warhol’s birth is today, and to commemorate it, they have started the Figment project, which is a 24-hour-a-day, 7-days-a-week live web-feed of andy warhol’s grave, which has the word “Figment” engraved on it.

finally, 15-minutes of fame for a guy in a kilt and a sporran that was there when i decided to tune in… 😉 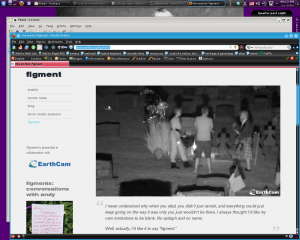 although, in this case, he’s undoubtedly a lot better off than he was… 🙁

at approximately the same time as i met my friend rick, who is now in the process of dying.

all i know is from text messages from sasha, who is the executor of rick’s living will… he was put on a ventilator two days ago, and has not regained consciousness for two days… they say if he doesn’t start responding to therapy soon, they’re going to stop. 🙁

ETA: they cut back on some of his meds, and he came around. he didn’t say anything, but he recognised sasha and smiled…

ETA 130210: he got his ventilator taken out this morning. i went to see him, and was shocked when the toothless, feeble old man hooked up to wires and tubes in the room turned out to be rick… certainly not the same rick i dropped off at the hospital four days ago… 😮 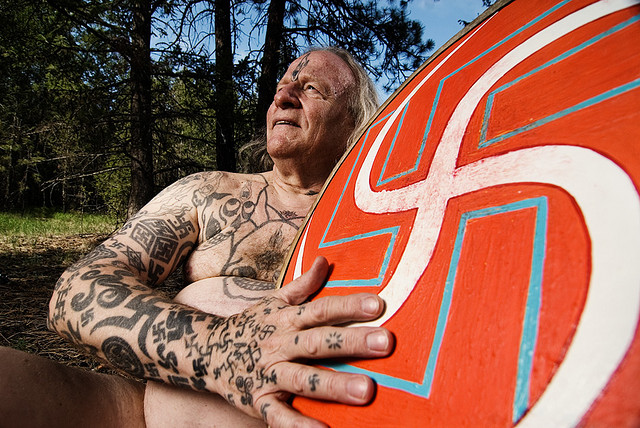 Sorry to say that my dad, ManWoman, is not faring well. He has a kind of cancer that causes his bone marrow to cease making blood. The technical name is Refractory Anemia with Excess Blasts. In short, without new blood, it is impossible to breath, fight infections, or clot and stop bleeding.

He had been receiving transfusions of blood and platelets, but there is no cure for this kind of cancer. Not chemo therapy. Not bone marrow transplant, because he is old and weak. In any case, ManWoman does not wish to endure weeks of traumatic medical treatment, when the potential time gained is so very small.

ManWoman has made the decision to pass peacefully — and with Dignity — in the comfort of his own home, surrounded by family and friends. No further transfusions or treatments will be made — except medication for the rather intense pain. When the blood cells from his last transfusion are gone, well… The clock is ticking. There is no exact prediction how much time is left. One day or a few days — probably. A week or two — maybe. Months — not very likely.

I wish there was better news, but there isn’t. It will be a sad day when he passes, but he has left the world an enormous and inspired body of work. He will not be forgotten by those who love him. We will always carry a piece of him in our hearts.

if there’s such a thing as reincarnation, Senator McGovern, please hurry back.

Mun Yong-myeong otherwise known as Sun Myung Moon. how are 40,000 people going to get married at the same time now?

people like him can die all the time, for all i care. 😐