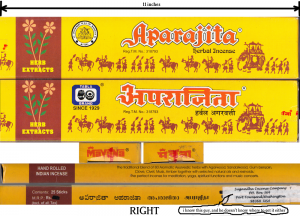 aparajita is one of the incenses that prompted me to go into the business of being an agarbatthiwala. it is an incense that is characteristically used by devotees of ravi shankar and george harrison. it used to be very common, and places like tenzing-momo and zenith supplies carried it as a matter of course, and even more obscure places carried it, along with a million other, less well known incenses.

that was then, this is now.

you would think that i could contact them through mavana dot com, but the first time i wrote them, about 3 years ago, there was no response from either of the two email addresses listed on their contact page, and the last time i wrote them, the message to one of the addresses bounced almost immediately. the last time i was able to find any aparajita at all, it was through an incense supplier i know in port townsend (who is also an old hippie, and beset by the health of an old hippie, which means that he has spent a large portion of the past 3 years in the hospital, thus making him somewhat unreliable as an incense supplier), who knows a guy in chicago who had a bunch of aparajita that he wanted to get rid of, and i bought all he had, which was 4 dozen boxes.

that was about 6 months ago, and i just sold my last box to a very disappointed customer in marietta, georgia, who had thought that i had more in stock.

to make matters worse, in my search for a reliable source of this smelly gold, i have discovered that there are at least two other indian incense manufacturers who have decided to take advantage of the situation by producing fairly sophisticated knock-off packaging which contains nothing like the authentic aparajita. the following is a picture of the packaging for one of the “knock-offs” which i bought a quarter kilo of before i realised that it was not the same thing: 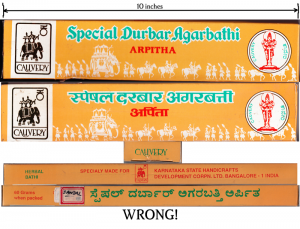 i have been looking for a reliable source for this incense for around 10 years, and i know that my search is not in vain. i have heard rumours from a couple of different customers that aparajita is apparently still available in india, but the manufacturer doesn’t want to send any less than an 8′ by 8′ shipping container of it outside of india. also, i looked for another variety of incense (amber aromatics “sital flora”, which is largely a neem scent) for 25 years before i found some, whereupon i bought a kilo of it, and still have more than ¾ of it left, so i know that eventually a source will be found.

i just currently don’t know who it is. if any of you get a crazy idea to go shopping in india for incense, let me know and i’ll put in an order.