my host provider has decided that he’s going to stay in business for his existing customers but not take any new customers. it eases my concern about finding a new host provider immediately, but i’m still going to move eventually, because i really don’t like being jerked around like that. the first time you said you were sorry and i gave you another chance, but the second time it was entirely my fault, and i don’t want it to happen again. 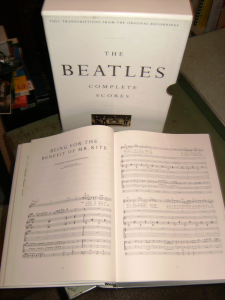 in other news, my copy of The Beatles Complete Scores came in the mail today. this is a book that i have wanted ever since it was first published in 1989, and it’s 1136 pages of the actual music by John Lenon and Paul McCartney from the people who would know. this means that i can now work on arrangements of things like Being For The Benefit Of Mr. Kite for Snake Suspenderz without having to rely on somebody else’s frequently incorrect interpretations of what the chords are… and i can finally figure out the chords for Michelle, which i have been wondering about for 30 years… 8)

oh yeah, i got email from someone who wants to interview “Rev. Guido DeLuxe” concerning the Church of Tina Chopp. she said she was interested in tracking down the truth behind the rumours… she was also born in 1988, which was well after the church had established its presence… i wonder what sort of gibberish i should spout in order to confuse her even more… hey, she wrote to me…