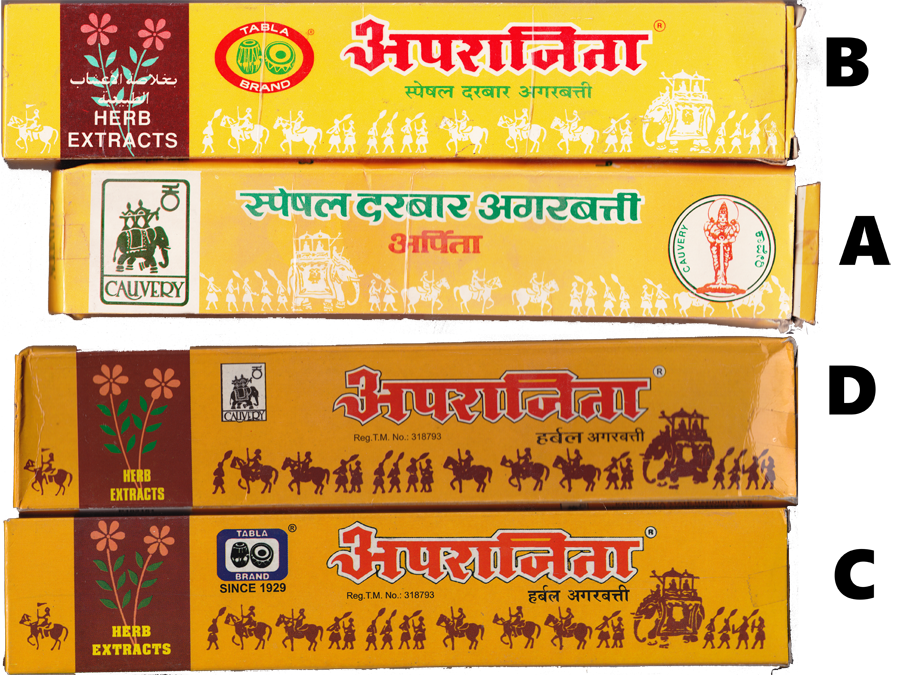 so my package arrived, and it contains what appears to be the correct stuff, so my anxiety has been pretty much erased…

however, my inquisitiveness is piqued, because the packaging is slightly different from what i would have expected, and it contains some elements that are what i thought to be indications that it was not the “right stuff” after all.

a number of years ago, when i first started searching for aparajita (example B), i came across example A, which was definitely not the right incense: it was a different colour, and smelled distinctly different, both when it was and was not burning. also, example A was one inch shorter than the authentic example B. i distinguished this by saying that it was “Cauvery imitation aparajita” and that was recognised by several of my incense-geek friends as being one of the characteristic differences between the authentic “Tabla Brand” aparajita and any fakes that were floating around.

it was interesting, too, because i found that same, or similar “cauvery” incense in a number of places, and not always with that packaging. it was always more or less the same incense, but it was presented to the public in a variety of ways, including the imitation aparajita package.

the last time i was able to buy “authentic” aparajita incense, it was in the package example C, which was significantly different from example B, but was essentially the same incense, in that it was the same colour and odor as example B.

but i was initially very suspicious when i opened my package and discovered the “Cauvery” logo on the packages inside, example D. however, they are the same colour and odor, both when they are and are not burning, as example B.

of course, because of the fact that they’re manufactured in india, i will probably never know for sure what’s going on with the packaging, and whether or not “Cauvery” is making “authentic” aparajita. but at this point, i’m very happy with the outcome. 😀