if you’re vegetarian, you should probably skip this post, because it is all about the glory of eating other sentient animals. you have been warned. 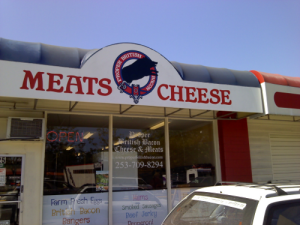 i love the web…

even when i don’t, i still, secretly, deep down in my being, love the web, and this is one of the primary reasons why.

the other day i was idly surfing around and i came across a link for Proper British Bacon, and i thought to myself, “i know where that is!” so i took the short jaunt down the hill and visited.

i actually got there early: their hours are from 12:00 to 6:00 wednesday through friday (or saturday, i don’t remember), and i got there just before 12:00, so i waited until they opened the door, and went into about as british a butcher as i imagine exists on this side of the ocean. there was the requisite rack of “Spotted Dick” and other sweets, but i only had eyes for the pork. i didn’t even check to find out whether they carried mutton or not, i figured that could wait until my inevitable next visit. i was quickly on my way with my little package of joy.

all in all, it was a very productive day, and you can be assured that i will be making visits to proper british bacon in the near future.

vegetarians, you can quit hiding your eyes now, it’s all over with.

so i was forced, once again, to switch host providers.

i was having a conversation with the (now) previous host provider, who said that there was nothing to worry about, and then, two days (literally) later, i get an email from him that says he’s going out of business – again… he gave me a date of 18th septembr as the date… then, he sent me email the next day that said that the original message was sent “as a draft”, and that the actual date was 9th september.

i have gotten so tired of people jerking me around – this guy was doing okay, with the exception of saying he was going out of business a few months ago, but then changing his mind and deciding that he was going to stay in business for his existing clients – but after i got the “draft” message, i decided to be proactive and rustled up a couple of potential new host providers, and began the process of moving. whether or not he was going to change his mind, i’d simply had enough of his being able to jerk me around.

i switched the DNS numbers two days ago, and there was the requisite 48-hour chaos period while the new DNS propagated, but it appears that everything has settled down at this point.

shortly after i switched the DNS numbers, the (now) previous provider called me to see how the process was going. i get the impression that he was waiting for me to get out of his system, because now, none of his domains are available. this is a guy who is apparently a high school student who “lost his job” and can’t run his service any longer. the problem i have with that is that hosting web sites is my job, and if i don’t have a host provider, I will go out of business.

i switched to a professional host provider, not a “skript kiddie”, that has a proven, international record (no, i did NOT go back to 1&1), and i’m actually paying less than i was with the previous host provider. hopefully this will be the last time for a good long while, because i’m totally over it.