i belong to the Rudraksha Bead Societies Club email group, and this message from Anil Kumar came through in a larger discussion about the Himalayan Academy. 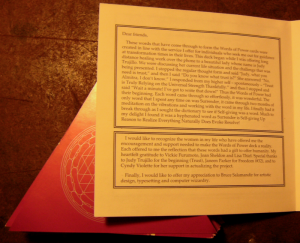 I have been reading from Himalayan Academy and their various sub websites, almost regularly for the past few years and the information available is simply amazing. The monks keep updating it on a regular basis. You can follow their daily blog which they call TAKA on the below link:

For Modern day Mystics who want to know the significance of this Giant Crystal Shivalingam ( also known as an Earth keeper Crystal), they can follow the below links,

Almitra Zion also had visions of this EarthKeeper Crystal apart from Gurdeva Satguru Sivaya Subramuniyaswami who then deputed her to procure the same.

i did quite a bit of typesetting and design work for almitra zion from about 1989 or so until 1995, ending soon after i moved from bellingham to seattle, and posted about my interactions with a lady at the fremont sunday market who was using the "Words Of Power" cards in the past, but here is an independent, third-party recognition that almitra does, in fact, exist, crazy as she is.

i met almitra during the time that i was working for the advertising company in bellingham and doing work “on the side” for an esoteric book store. the owner of this book store put me in contact with someone who, she said, was “opening another ‘esoteric’ book store” in a different part of town. that person was almitra, and i worked with her until i moved to seattle, doing sign painting, making labels for the book shelves, designing and printing flyers and pamphlets and doing advertising design, including a number of advertising magazines, as well as artistic design for these crazy cards that she wanted me to print for her in 1992, which had her “intuitive” meaning for the individual letters of the words. they were actually sort of hillarious, in a sad kind of way, because her “intuition” frequently told her what words meant, but only if they were spelled in her own “intuitive” way, and i had to inform her on a number of occasions that a particular word wouldn’t work, because the dictionary disagreed with her “intuition” and if i spelled the word the way she wanted to spell it, she would end up looking like a pompous, uneducated moron.

she never actually paid me with money. she gave me a fairly large african drum, and a lot of promises, but it was only after i told her that i wasn’t going to do any more work for her that she offered me the computer that she had bought to do the design work that i had been doing for her. it was an acceptible offer to me, since i was in the business of doing typesetting and design work, and, for the time, it was a pretty attractive computer – a Mac LCII. in return, i completed one more magazine for her, and then informed her that i was now living in seattle and couldn’t do work for her any longer.

shortly after i moved to seattle – once i had actually got an apartment of my own – my former-friend jim came to visit for a couple of weeks, ostensibly because he wanted to “get straight” after pretty much losing most of his life to bottles of cheap, fortified wine. i later learned that he was working with almitra, and one of the reasons he came to “visit” me was so that he could get a copy of my key, which, after i realised that staying at my apartment wasn’t going to help jim “straighten out” and threw him out, he proceded to go back to bellingham and give to almitra, who used it to break into my apartment and steal my computer back… and then he had the gall to email me a couple of weeks later because he couldn’t break the password that i had set to restrict access to the computer and he had to ask me if i would give it to him… which, of course, i wouldn’t, and laughed at him for his delusion that i would… 😐

apparently, she’s got a web site (designed by her son, who was approximately 4 years old when i was working for her), and she’s actually selling the "Words Of Power" cards in an online revival of the original central sun brick and mortar shop in bellingham – she says that it also operated on kauai before that, and it well may have, but if it was, it was very likely a "hippie tarot readings and esoteric doodads at inflated prices" shop run by a post-adolescent psychotic who thought she was a healer, because that’s pretty much what it was when i worked for her in bellingham.

these people must be members of my karass, because as hard as i try to get away from having to associate with them, they keep on showing up, whether i like it or not…