Hybrid Elephant has filled a number of incense orders in the last month, as well as dealt with people who order from outside the US and don’t read the shipping policy. i still haven’t figured out a work-around for it, even though i know one exists, because i haven’t been motivated enough.

there are now reviews for The Fremont Players, thanks to Æther Pie (otherwise known as “Princess Perpetua of Montague”). seriously, simon told me to “pick and choose” some “appropriate quotes” from the reviews, and post them on the web page. because of the fact that i’m doing this with HTML and not PHP, i made the copy changes, and then Æther Pie made the format changes… 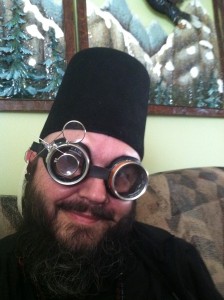 i’m also making some headway on the James L. Acord Bronze Foundry site, despite their lack of communication. there’s now a static page, and i’ve got a little more than half of the requests they made on the ‘redlines’ that they sent me working… although the other half are either not possible, or possible making more drastic changes in their template than i am comfortable making without some intensive research.

i was given a pair of steampunk goggles by my mother-in-law as a xmas gift this year. they’re made so that i can unscrew the frames surrounding the lenses and remove them… which means that i can replace the lenses with my prescription lenses (i just got new glasses a couple of weeks ago). i was also given a HD-PLC Ethernet Adaptor starter kit, so i now i can wire our entire house for ethernet — most importantly, the workshop, where the wireless adaptor reaches, but the OS9 mac doesn’t want to recognise our 50-character, un-changeable wireless security password. with the HD-PLC ethernet adaptor, i can make an end-run around having to wire separate ethernet cables, and i can move things like our two humongous hard disks out to the workshop, where they won’t take up as much room or accumulate as much stanley-dust as they do inside the house. i was also given a copy of The Practical Pyromaniac… heh heh heh… 👿

we’ve done two weekends of performances of Sleeping Beauty & The Pea, and things are going well, in spite of the fact that i played my B♭ sousaphone a couple months ago, and i think i may have done more damage to my brain then i had done when i had my injury… seriously, ONE day of playing the B♭ fingerings, and now i CAN NOT remember the C fingerings… AT. ALL. 😐 strangely enough, apparently the only way around this problem is to NOT think about it, and, as much as possible, NOT look at the music… the problem is that i’ve got three more weekends of panto performances, and two snake suspenderz gigs coming up within the next few weeks, and i’m not sure how i’m going to get through it.

i’ve got a Big Bois With Poise gig on new year’s eve, at the Hale’s Palladium/Moisture Festival Benefit party. because of the fact that we have been on national television twice now, we are billing ourselves as “The World Famous Big Bois With Poise”, and we were actually requested to come and perform for the new year’s party… of course they’re not going to be paying us anything, but we get into the party for free, where everyone else has to pay $50, so it’s an okay deal. because of the fact that we’re going to be performing indoors, we’re doing the “short dudes” act, rather than the “big boys” act — i.e. we’re going to be on “short” buckets, and dressed in diapers and bibs. we’re also going to try to memorise auld lang syne instead of our regular BBWP chant, but i don’t hold out much hope… 😎