last night we played for a gay wedding. a couple of years ago, we played for this couple’s 40th anniversary, and, now that they’re actually able to get married (gasp), they wanted us back for their wedding. it was an honour, of course, and the only shame was that they had to live together for 42 years before they were legally able to get married. we got plied with many different varieties of victuals, beer and liquor, played up a storm (literally, not last night, but this morning) and walked away with $200 a piece. now all we have to do is find a gig like that every week, and we’ll be set. 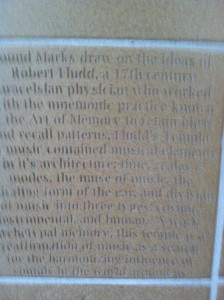 today was the 2nd annual “Day Of Music” at benaroya hall… and the grammatical error that was in the bus tunnel is STILL there. i lived near there in 1998, when it was originally put up, and noticed it then, and sent several letters complaining about their shoddy attempts at proofreading to various different civic groups, but, as is obvious, nobody ever did anything about it, and my tax dollars are still going towards the mis-education of millions of metro riders every year…

but that was then, and this is now. i was given a “discounted” parking pass for the parking garage under benaroya hall, but it was for a “$3 discount” on the, normal $7 parking fee, and i figured that if i get there early and search around a little, there’s a good chance that i can park on the street for free, which i did: i parked four blocks away, on the waterfront, and dragged my tuba uphill six blocks, because there is no wheelchair ramp at the “Waterfront Steps”. it actually wasn’t all that bad, and i figured that i would find another way down later on. i showed up in time to watch the one man band who was on stage ahead of us, and during his time on stage the weather went from dry but cloudy to “car wash” status, and they actually told us that we might be delayed or cancelled, if it got too outrageous… which, of course, it didn’t, but that didn’t prevent me from playing a half-hour set with rain dribbling down my back… and they don’t call upright tubas “rain catchers” for nothing… 😐 and, of course, i wasn’t able to find a way down, so i had to walk three blocks out of my way, in the pouring rain, which, at that point, also included lightning and thunder, to get back to my car.

allegedly we have another gay wedding in tacoma, next month, that also pays us $200 a piece. thaddeus was connected to this gig by an old friend of his who books bands for events. maybe he should… um… i don’t know, let his friend know that WE’RE A BAND THAT NEEDS GIGS or something like that… and then, maybe it won’t have been nine months since our last gig… 😐