my friend david bought a really expensive curved soprano saxophone on ebay recently — like $1200 expensive — because it had been “cleaned up and completely repadded” by… um… someone.

then he contacted me to find out if he had actually gotten a good deal or not.

on the surface, it appeared that he had paid a little too much, but not anything that couldn’t be fixed with $200 or so of competent repair work. he informed the seller, and actually got $250 back, making the instrument worth $950… still a bit too much, but it appeared that it could be rescued, so i took on the job. 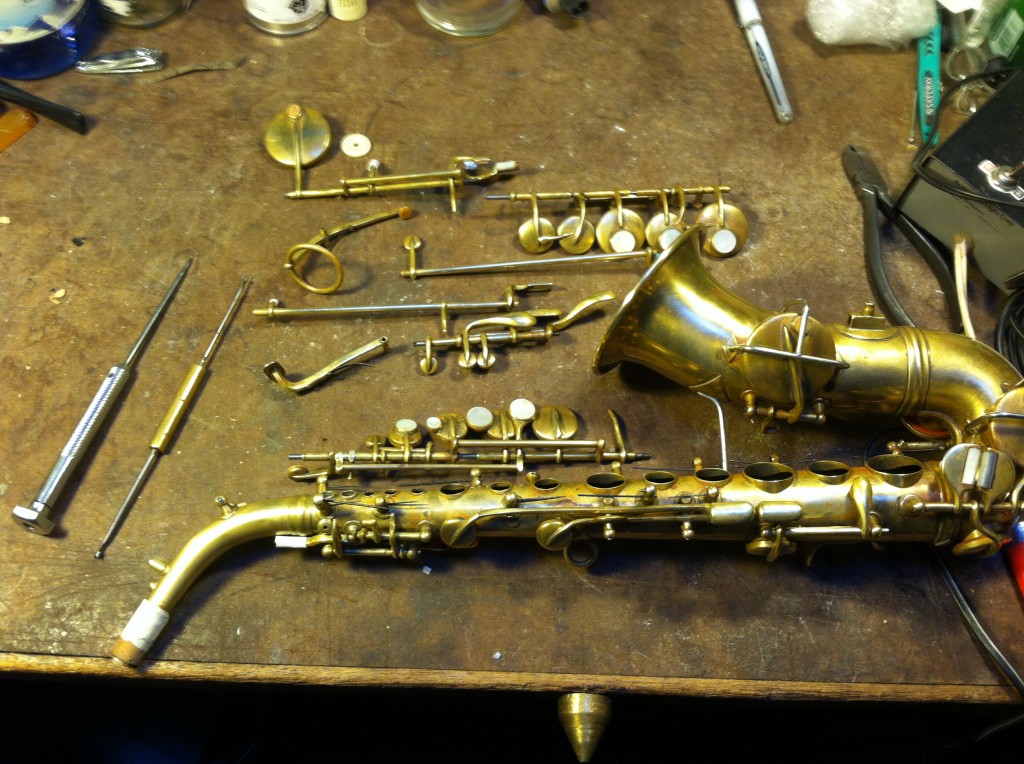 the first thing i did was remove all the keys… which is the first thing you do when you get a sax that needs to be put back into playing condition. i quickly discovered that all the keys had not been removed when it was “cleaned up and completely repadded”. 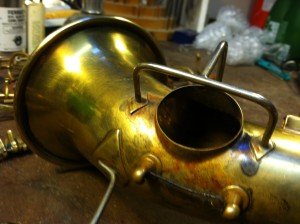 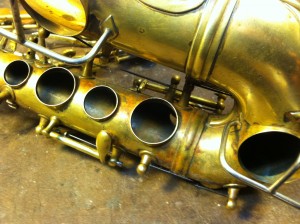 in fact, on top of the 4 keys that i knew about that were composition cork (instead of the standard leather that most saxes have), i found two pads that were so poorly installed that they probably can’t be rescued. on top of that, i found two springs that were installed in a “haphazard” way (they were installed backwards), one of the clothes guards is missing and another one only has two of its three solder points made solid, and the neck cork needs to be replaced. also, because of the fact that it’s an old curved soprano it has D auxilliary key (modern ones don’t have it), and because of the fact that modern ones don’t have it, people who don’t know any better will block the key closed, so that they don’t have to regulate it… but that also has the unfortunate side effect of making the instrument play out of tune… which is exactly what happened in this case. 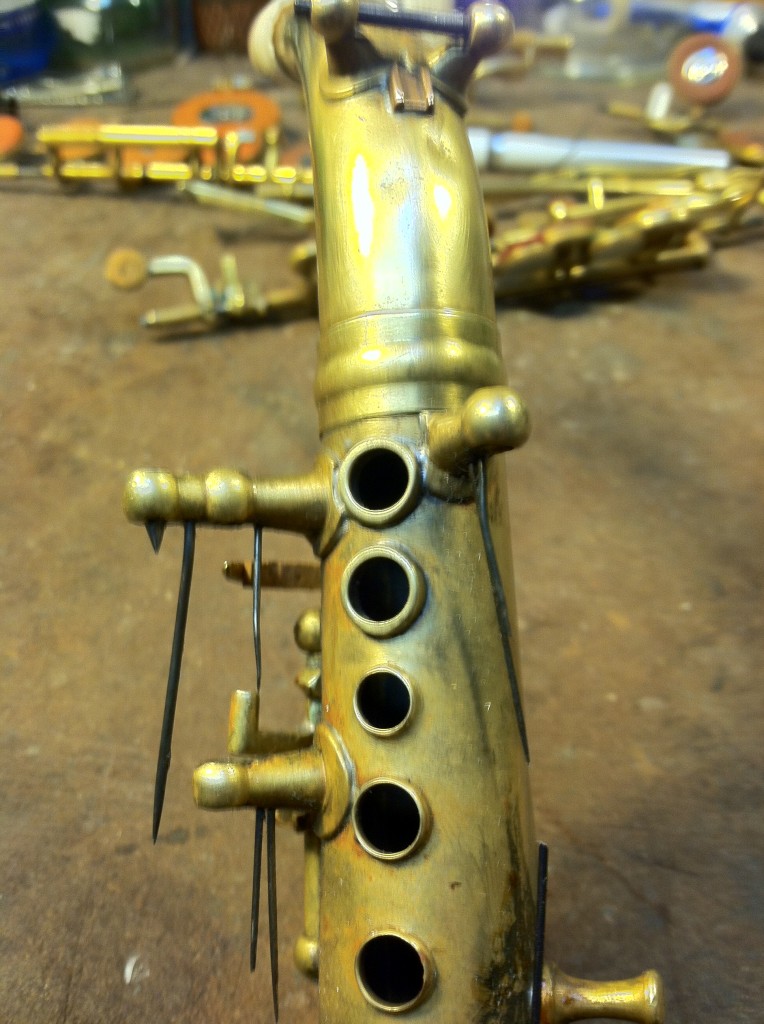 this is why you have to be REALLY careful about buying old curved soprano saxophones off of ebay… he could have bought a brand-new, FUNCTIONAL curved soprano sax for $800… and he probably will do that once he decides what to do with his $1200 instrument that needs $500 worth of repair before it can even be played.

today, moe’s dad and his wife came to retrieve moe’s mom and her car from their visit with us this past week (it’s a long story: what it boils down to is that, despite the fact that she owns a very large, quite luxurious SUV, moe’s mom is afraid to, and refuses to drive on the freeway, or any place with which she’s not already familiar). they came up by train, i picked them up at the station, and they took off in moe’s mom’s car, whereupon they immediately proceded to get lost and ended up on the freeway going the wrong direction. allegedly they’re going to be back around 6:00 or so, with moe’s mom, and moe, who is at a dog trial today, which is why her parents are here. then they’re going to take the rabbit and go back to portland…

oh yeah… we found a pet rabbit in our front yard last week. it turned out to belong to our neighbour down the street, but they don’t want it any longer, so it’s going to portland with moe’s mom, and she’s allegedly going to give it to its new owner… i say allegedly because moe’s mom is in love with the rabbit and wants to take it home herself, despite the fact that her housemate (who is also her landlord) would have a fit…

i’ve got a BSSB rehearsal tuesday, and then a BSSB performance on saturday, i think… or maybe it’s sunday…

cannabis is legal! let’s keep it that way! 😎

moisture festival ended (for me) two weekends ago, and it ended for everyone last weekend. i spent a week recovering, then…

moe’s mom came for a “visit”. she’s currently asleep on the recliner in the living room. moe is at work, and won’t be home until late this evening. i had some things to do earlier today, but… 😐

she wants to visit the buddhist temple down the street. ordinarily i would be all for her visiting non-christian spiritual temples, but i don’t want my first time visiting the buddhist temple to be simultaneous with hers… if for no other reason than i don’t want to be the target of her stupid ignorant questions for which i don’t have a ready answer… honestly, i would be a lot more comfortable taking her to the hindu temple down the street, but she didn’t ask for that…

it’s possible that i’m going to have to break in a new counsellor. the old one (8 years now) is going to a system where he can only accept medicaid, and i’ve only got medicare… it’s possible that i can get supplememtal medicaid for my “mental health issues”, but i don’t have the first clue what to do to find out (moe suggested internet 😐 ) and there’s a limited amount of time before a decision has to be made one way or the other.

i got two incense orders, yesterday, from repeat customers who i haven’t heard from for a long time, and who i have been agarbathiwala to for an even longer time. one said that we were “the bestest pen-pals a decade ago”, and the other one has been a part of my search for aparajita for at least 8 years.

War is our most important product