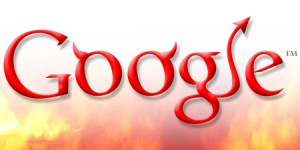 on 131206 i complained about my request to use Guido Super DeLuxe as my username on Google+ being denied.

of course it’s google, which means that i won’t be using it anyway, but… i will now be able to leave scathing comments on bob larson’s videos… <stewie>victory is mine!</stewie> 👿

needless to say, i did not have another brain injury.

this year, as far as it concerns me, everything went right enough that i can consider this year’s OCF experience one of the best vacations i have ever had. things didn’t go 100% right all the time: i lost my sunglasses, there was some controversy about a new part of the theatre, there was the usual tensions regarding whether incense smoke or the odour of porta-potty was more preferable, the booking representative from the ritz didn’t communicate with me directly regarding our tokens… and it rained… but it all worked out in the end: i found my sunglasses immediately after arriving at home, the part of the theatre that was causing the controversy (a place that i called the “wheelchair-exclusion zone”) was summarily dispensed with, next year they’re going to expand the theatre (AGAIN!! 😀 ) and move the porta-potties farther from our noses, we received our tokens anyway, and it rained for almost exactly an hour, before the fair actually opened, and it was cool and cloudy all the rest of the day. 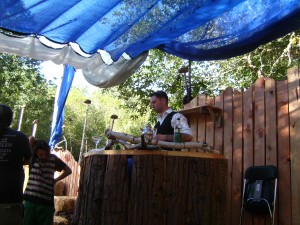 morningwood is now a permanent, year-round installation, rather than having to be taken apart and stored elsewhere during the off season — much to the relief of simon, who now gets to arrive and NOT have to spend a month moving pieces, sorting them out, and building the stage from scratch. as a part of the approval for making it permanent, there were a number of archaelogical digs in the area, and a lot of investigation into the prior use of the site. i got to participate in martini hour with some of the high-up bigwigs from archaeology, who have proved that where morningwood odditorium now stands has been a gathering place for humans for at least 10,000 years. 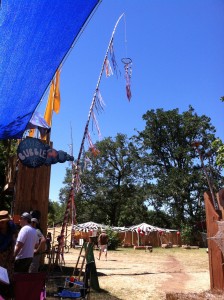 the dress rehearsal on thursday night, according to tradition(?), is the first time the show is performed in its entirity by a majority of the cast and band, and this time was no exception… what was the exception is that, for the most part, it was a much more complete show than it has been in the past. two years ago we substantially modified a significant portion of the script on friday, after the first day of performances. this year, it was, more-or-less, the same show on thursday as it was on sunday. the primary difference was that there were more lines that were forgotten on sunday than there were on thursday, which is about the least amount of hassle for the amount of entertainment we got out of it that is possible, under the circumstances. there will have to be some re-writing of the parts before december, to remove the OCF-specific references: lines like “lets go to the barter fair! best shopping at OCF!” and references to “flower children” and the ritz will have to be changed in order for our seattle audiences to make sense of the plot 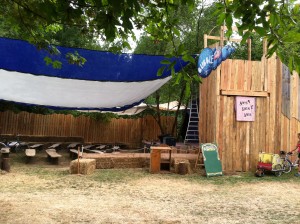 sunday afternoon, after the last show, i was in the ritz, and a guy was leaving. he walked to the bottom of the stairs, and kept on going down. somebody asked him if he needed help, and he mumbled something which could have been “yes”, “no” or “potato”, and two or three people gathered around him. i came down from the top level, and asked if he was diabetic, to which he responded “no, well… yeah”. at that point a couple of the people ahead of me took his shoulders and started guiding him out of the sauna. we got him outside, and sat down on one of the benches outside of the sauna, and he started coming around. he said that he had been “voluntarily” lowering his blood-pressure (it sounded a lot like the kinds of things the PHBFH used to say) and that the “chanting” had put him into a “mind-space” from which he couldn’t recover… i was concerned that he may have been having a heart attack or something. i left him when the ritz’s “certified medical professional” showed up. i went by about a half-hour later and the guy and the “CMP” were still sitting on the bench, talking, but i didn’t hear any sirens or anything that might have implied that he was taken away in an ambulance. i imagine that they have pretty regular medical “emergencies”, especially considering that they let pretty much anybody in to the sauna, regardless of how drunk, high, handicapped or screwed up they are, so they must, either, be pretty good at dealing with these emergencies, or are even better at covering them up. considering that it is OCF, either one is a good option. 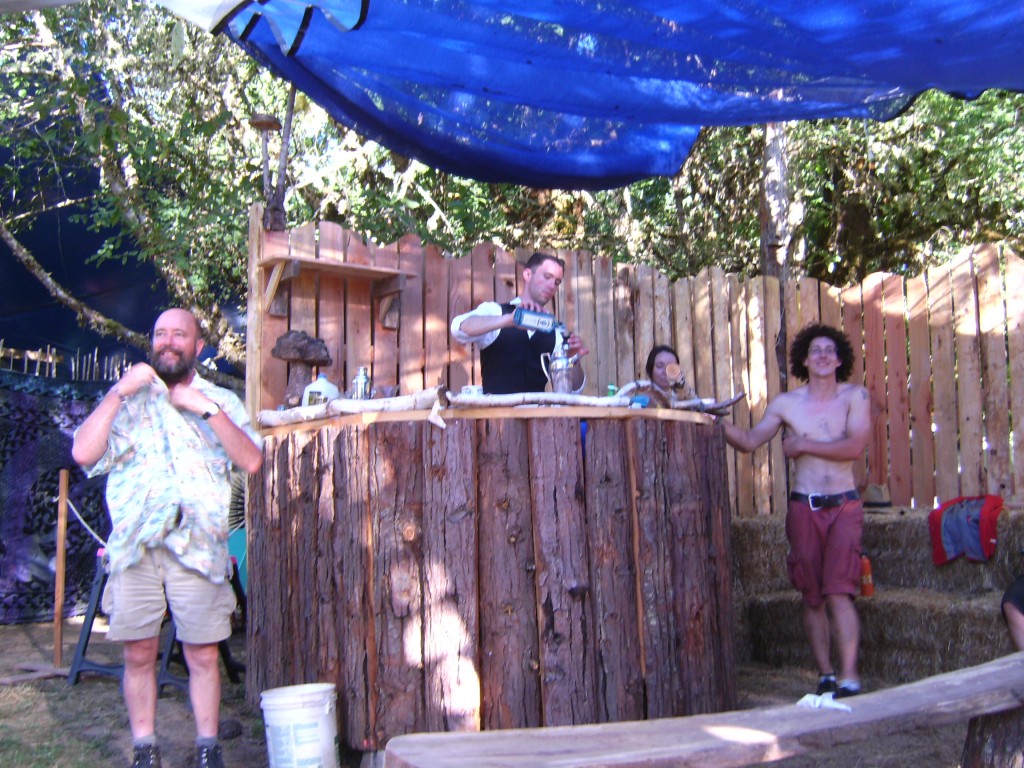 140709 Simon and Keith Neale, unknown martini-drinker, and the guy who taught the horse’s ass to tap-dance… no, really!

there are more pictures, which, if i get around to it, will be posted on flickr.