Psychedelic mushrooms dramatically increase connectivity between otherwise uncommunicative parts of the brain, according to researchers from Imperial College London in an article to be published in the November edition of the Royal Society’s journal Interface.

Paul Expert and his team analyzed functional magnetic resonance imaging (fMRI) data from two groups of people — one who had ingested a small amount of the active agent in hallucinogenic mushrooms, psilocybin, and another group who was given a placebo.

They found that the main effect was the creation of stable connections between parts of the brain that, under normal conditions, only communicate with each other in dream states — such as the hippocampus (which deals with short term memory and spatial recognition) and anterior cingulate cortex (which regulates rational cognitive functions).

The result of this stable cross-wiring is a more interconnected brain, as shown on the diagram below: 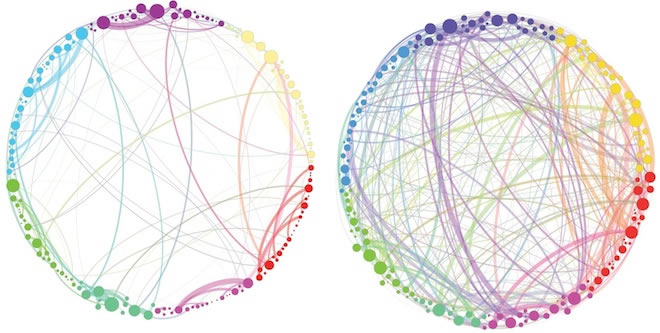 On the left is a data visualization of a brain administered the placebo; on the right, one that has been subjected to a mild dose of psilocybin.

“We can speculate on the implications of such an organization,” Dr. Expert said. “One possible by-product of this greater communication across the whole brain is the phenomenon of synaesthesia” — which is the experience of having senses overlap, such that certain smells are accompanied by flashes of color, or certain sounds are accompanied by tastes.

It is also believed that rewiring the brain in this manner may allow scientists to find more effective ways to treat depression or help smokers and alcoholics battle their addictions.

This research is only possible thanks to a a recent loosening on the regulations regarding the study of psychedelic drugs for medical purposes. This is a positive measure, said study co-author Giovanni Petri, who told Wired that “in a normal brain, many things are happening. You don’t know what is going on, or what is responsible for that. So you try to perturb the state of consciousness a bit, and see what happens.”