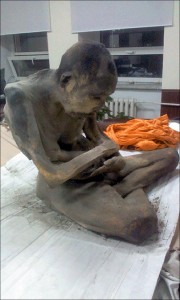 This extraordinary picture shows the mummifed male body which is believed to be several centuries old. It was found at 6.30 pm 27 January 2015 in Songinokhairkhan province, reported Mongolia’s ‘Morning Newspaper’.

‘The mummified body sits in a lotus position, as if still meditating.

‘Experts that only had time to carry basic visual test say they believe the body can be about 200 years old’.

The report added: ‘So far there is no information as to where the body was found. The only details we learned was that it was covered with a cattle skin’.

It was not clear if it was the skin of a cow, horse, or camel, said the report. The mummy was delivered to Ulaanbataar National Centre of Forensic Expertise’.

Initial speculation is that the mummy could be a teacher of famous Lama Dashi-Dorzho Itigilov.

Dashi-Dorzho Itigilov, born in 1852, was a Buryat Buddhist Lama of the Tibetan Buddhist tradition, best known for the lifelike state of his body.

His remains were reported not to be subject to macroscopic decay.

As police say lama found in lotus positon was destined for sale on black market, there are claims it was one step away from becoming a Buddha.

A mummified monk found in the lotus position in Mongolia is ‘not dead’ and is instead one stage away from becoming a real-life Buddha, it has been claimed.

Forensic examinations are under way on the amazing remains, which are believed to be around 200 years old, having been preserved in animal skin. But one expert has insisted the human relic is actually in ‘very deep meditation’ and in a rare and very special spiritual state known as ‘tukdam’.

Over the last 50 years there are said to have been 40 such cases in India involving meditating Tibetan monks.

Dr Barry Kerzin, a famous Buddhist monk and a physician to the Dalai Lama, said: ‘I had the privilege to take care of some meditators who were in a tukdam state.

‘If the person is able to remain in this state for more than three weeks – which rarely happens – his body gradually shrinks, and in the end all that remains from the person is his hair, nails, and clothes. Usually in this case, people who live next to the monk see a rainbow that glows in the sky for several days. This means that he has found a ‘rainbow body’. This is the highest state close to the state of Buddha’.

He added: ‘If the meditator can continue to stay in this meditative state, he can become a Buddha. Reaching such a high spiritual level the meditator will also help others, and all the people around will feel a deep sense of joy’.

Initial speculation is that the mummy could be a teacher of Lama Dashi-Dorzho Itigilov.

Born in 1852, Dashi-Dorzho Itigilov was a Buryat Buddhist Lama of the Tibetan Buddhist tradition, best known for the lifelike state of his body.

Ganhugiyn Purevbata, who is the founder and professor of the Mongolian Institute of Buddhist Art at Ulaanbaatar Buddhist University, said: ‘Lama is sitting in the lotus position vajra, the left hand is opened, and the right hand symbolizes of the preaching Sutra.

‘This is a sign that the Lama is not dead, but is in a very deep meditation according to the ancient tradition of Buddhist lamas’.

The mummified remains, which were covered in cattle skin, were found on January 27 in the Songinokhairkhan province of Mongolia.

However, there is more to the story and now police have revealed that the monk had been stolen from another part of the country and was about to be sold off.

An unnamed official said that it was taken from a cave in the Kobdsk region by a man who then hid it in his own home in Ulaanbaatar.

He had then been planning to sell it on the black market at a ‘very high price’, with local media claiming he wanted to take it over the Mongolian border. Police uncovered the plot and quickly arrested a 45-year-old, named only as Enhtor.

According to Article 18 of the Criminal Code of Mongolia smuggling items of cultural heritage are punishable with either a fine of up to 3 million roubles ($43,000) or between five and 12 years in prison. The monk is now being guarded at the National Centre of Forensic Expertise at Ulaanbaatar.