i got new glasses about 2 months ago. they’re round, for the first time since the 1990s. they also came with polarised brown “clip-on” sunglasses. i thought they looked really cool, and they matched the brown cap that i had been wearing… 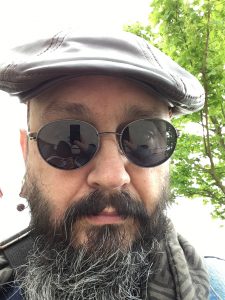 but i quickly noticed that i was feeling REALLY depressed… like last year, when the smoke from the forest fires was so prevalent. i looked up and the sky was the same colour brown, and it felt like i was being opressed and couldn’t get away.

i did some research, and talked to a few people, and came to the conclusion that there is a modicum of truth to the old aphorism about “looking at the world through rose coloured glasses”… only these were crap coloured glasses.

so i ordered a set of grey clip-on sunglasses, and when i first put them on, i noticed a PROFOUND difference, almost immediately.

i moved stuff around in my office, in an attempt to make things easier to access. i’ve now got my main desktop computer, my amplifier and my printer on shelves, right next to the monitor, and i moved the speakers so that i’m more in the “sweet spot” when i’m sitting at my desk than i was before. i still have to figure out where my laptop is going to live, because it had been on the desk where the desktop computer is, now. for the moment, it’s folded up and sitting in one of the shelves, to my left. it’s okay there, for now, but i’m fairly sure that, when i actually have to use it for more than a few minutes, like a couple of days in a row, i’m going to have to figure out a new spot for it, because where it is now is not good in the long term. i have been thinking of going to ikea and seeing if there are some half-shelf inserts for the expidit (now called “kallax”) bookshelves, because i could probably make better use of some of the shelves if there were half-shelf increments in a couple of places.

i celebrated moving stuff around in my office by spending a few days digitising vinyl records. the turntable fits a lot better on the right side of my desk than it did on the left side, and it is ORDERS OF MAGNITUDE easier to connect to the amplifier and computer. however, for some, unknown, reason, my internal CD/DVD ROM is not working correctly, so i can’t archive anything, once i have digitised it.

i sent out three emails to different agarbathiwalas that i know, who had expressed interest in the HPOI when i got it, but now that i actually have it in hand, i haven’t heard anything from them for a couple of weeks. i figure i can wholesale them for $25 a dozen and still make a profit, but if i haven’t heard anything from my email contacts soon, i’m going to try places like the Pike Place Pipe Palace, Tenzing Momo, and Zenith Supplies.

the weather has gotten nicer, and i am walking more, but i like to walk at sunset, and sunset is getting later and later as spring progresses. i like walking at sunset in my burnoose and djellaba, and being invisible. i’m also taking a basic circus skills for handicapped adults class, at SANCA, which is really cool, but i’m getting worn out by it really quickly. i really want to start going to the gym again, but i haven’t done it yet. 😕

politically, things continue to get worse, on a minute-by-minute basis. the probability is very high that congress will flip in november, which will mean that #drumpf will, in all likelyhood, be impeached, which will mean that mike pence will become president, which is an even worse proposition than #drumpf, in terms of human rights and the environment. whatever happens, we’re screwed, and will continue to be screwed for the forseeable future. when they said “emanentise the eschaton” i didn’t think it meant “by any means possible”. 😠 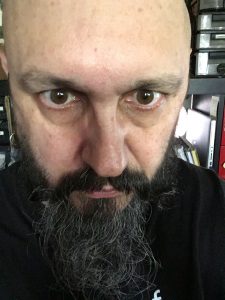