i learned something about our neighbours down the street… 😲

i’m not going to say who or what, but it explains some things, and i feel REALLY sorry for some of the members of their family. 😟

i hope they get what they need, soon, although, at this point, it doesn’t seem very likely. 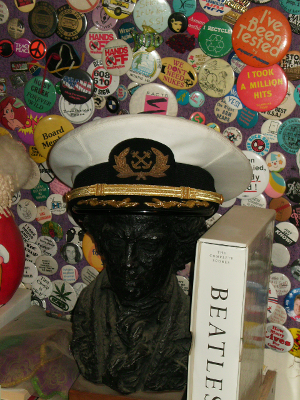 i got up at an unreasonably early hour this morning and went down to the FSM to busk.

while there, i found one of the vendors had a hat for sale for $10, that i couldn’t resist. it’s not a costume hat, it’s a real, authentic, merchant marine hat, that probably belonged to an officer. inside the hat was a little printed card that said “Return this Bernard Cap to:” that had the name, address and phone number of someone who was completely unknown to the person from whom i bought the hat.

i googled the name, and came up with some confusing results. googling for Jon H. Stebbins – the name as it is actually written on the card – gets no results, but it asks if i meant to type “John H. Stebbins” and gives a lot of nautical and marine references for that spelling. the one, glaring exception to this is the record of the courts opinion in reference to the case of U.S. versus Stebbins, from 2005, in which John H. Stebbins, Staff Sergeant, U.S. Army, raped his 6-year-old daughter, was convicted in a military court, and was sentenced to life without parole, plus a $75,000 fine. the opinion of the court was that he deserved everything he got…

however, if i just google Jon Stebbins, the first results i get have to do with the author of the book Dennis Wilson, The Real Beach Boy, The Lost Beach Boy and other classics…

i’m not sure either one of these is the Jon H. Stebbins that previously owned my hat, but if that’s the sort of people i’m going to find when i search for him, i think i’ll give it a miss…

busking went really well, despite the fact that we were a trio (sketch had another engagement). we got a lot of really positive feedback from the people in charge, and made a fair amount of money at the same time. i could get used to this… 8)

information reprinted from another of my web sites

I have been a musician for most of my life. Throughout my life, I have heard references to many famous musicians, some of whom have had a great deal of effect on my life, both as a musician and as a human being. One of the most profound effects my life has experienced is that which originated with the great artist, musician and composer, John Cage.

He was first introduced to me as a composer of “unusual” music. I have always been interested in the out-of-the-ordinary, and when I encountered a piece of music for the Prepared Piano, a John Cage invention, I knew I had found a kindered spirit. His unorthodox use of chance, creating music by rolling dice or following mathematical formulae, or even determining notes in a score by using star charts as an indicator inspired my own, interesting (many would say bizarre) unorthodox experiments. John Cage also had the honor of being able to study with the great serial composer Arnold Schönberg, who is another of my favourite composers, especially for his oratorio Pierrot Lunaire. One of my favourite characteristics of Pierrot Lunaire, outside of the music itself, of course, is the fact that when I was in high school, and I played it on my stereo, it would give my mother a headache. John Cage, himself, gave quite a bit of insight into his unorthodox way of thinking, and, by extension, his unorthodox music and artwork in his “Autobiographical Statement”, which first appeared in print in the Southwest Review in 1991.

Later in my life, I attended the Cornish School, where John Cage worked, and performed in the tiny performance hall which had been the original reason he invented the prepared piano, and it felt to me like I was following in the steps of someone I respected very much. At that time, I was also composing a lot of music using various numeric and geometric techniques. Somewhat later, during my first year at Fairhaven College, I performed Cage’s famous piano piece called 4’33” – which is, basically, four minutes and thirty-three seconds of silence, in three movements which are delineated by the performer opening and closing the cover of the piano keyboard. There is a web-based rendition of this famous piece of music, which is performed in one movement, sans piano. Oddly enough, my rendition of 4’33” was performed on an old, upright piano which, only moments before the start of my performance, I had managed to knock over on its back (I had to have about 6 other people help me lift it back upright again), and the keyboard had completely locked, so if I had had to play notes, I would not have been able to do so.

In 2001, I read of another performance of music by John Cage which I found to be particularly inspiring, which is a performance of an adaptation of Cage’s piece for piano called “As Slow As Possible”. In the small town of Halberstatd, Germany, in an old, abandoned church-turned-pig-farm-turned-performance-hall, an organ is being constructed for the performance of a piece called “Organ2 – ASLSP” (movement 5 of which can be heard here), which, when complete, will be the longest musical performance in human history, taking 639 years to finish. The performance started on 5 September, 2001, and for the first 17 months the only sound was silence, punctuated by the wheezing of the solar-powered organ bellows. The first three actual notes of the performance began on 3 February, 2003, another note was added in July of 2004 and another note was added in July of 2005. According to what I have read, an intermission is planned in 2319.

I have always had a lot of respect for people who make their living doing unconventional things. I have tried very hard to be one of those people, because it has become evident to me that the people doing unconventional things in their lives are among the only people in existence who are having even the slightest bit of fun that isn’t heavily influenced, and in most cases totally controlled by someone else. John Cage has always been a powerful influence in my life because of his ability to be unconventional and extremely successful at the same time.

so i went white water rafting on saturday. it started with getting up at zero dark thirty so that i could leave at 6:30 to get to st. fred’s house by 8:00. then it was breakfast at st. fred’s (bacon, eggs and hashbrowns, thanks to st. gordy) and off to cashmere, which is where the party ended. then it was getting all geared up, wet-suit, PFD (personal floatation device) and paddle, whereupon we were bussed west of leavenworth, about 14 miles up river to where we put in. it was way better than the last time i went, primarily because i didn’t actually fall in the water – although i had a hand, literally, in rescuing the guy in front of me (howard? steve?) when he fell in. once we got out, there was a barbecue, and then the ride home, which was fairly quiet because we were too tired to talk much. it was fun, but i used up way too many spoons, which meant that instead of being efficient and mowing the lawn yesterday, i slept most of the day.

moe didn’t go with us white water rafting because she had an agility trial saturday and sunday. it was cool for her, too, because in two days, two of her dogs earned their NATCH (North American Agility Trial Champion). one of the dogs, magick, had been trying for her NATCH for several months, but the other one, zorah, just breezed right through it, which was exciting, even if i wasn’t there to see it. so we went out to dinner last night to celebrate.

i got two T-shirts, on saturday, from T-shirt Hell (where the bad t-shirts go) that say “Tuba Hero”. i have a rehearsal later this evening and i intend on wearing one of them, just to see how many people notice. i’m also going to mow the lawn dandelions this morning, hopefully before it gets too hot.