that was, probably, one of the best trolloween celebrations i have ever attended… and i think it was primarily because of the fact that i wasn’t trying to do two things at once (i.e. playing in the band and being in charge of a vegetable sacrifice). not only that, but when i pulled up, yesterday — after having delivered our non-functional TV to the place where Bowling For Computers was taking place — the first person i ran into was a guy named michael, who was my assistant for the vegetable sacrifice! 😎

I HAVE NEVER BEEN IMPORTANT ENOUGH TO BE GIVEN AN ASSISTANT!! 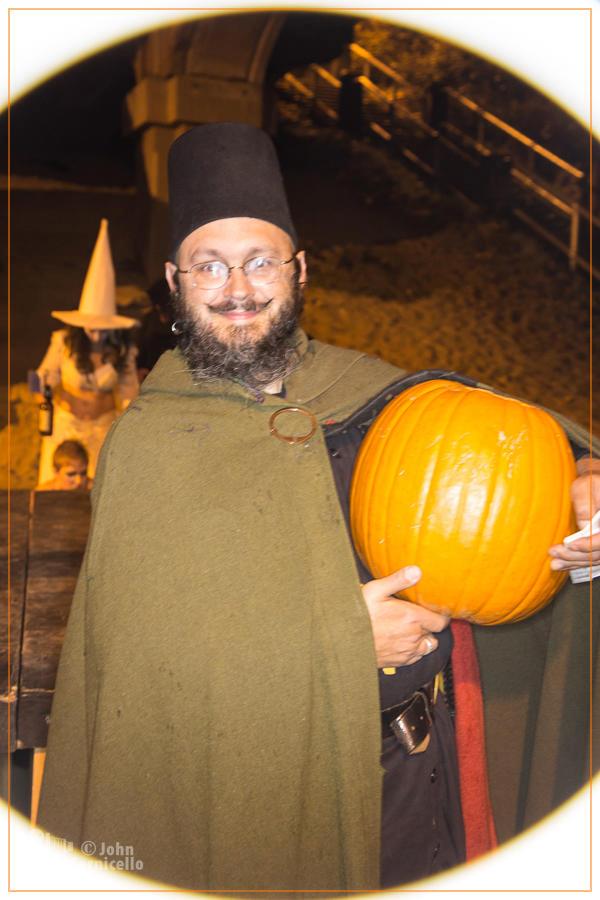 of course, michael was multi-tasking (much like i would have been under circumstances like have existed in the past), and had a prominent rôle as one of the “clowns doing The Hustle“, later on in the performance, but his presence and help was much appreciated.

the vegetable sacrifice went off more-or-less as planned. it was a fair amount more chaotic than it has been in the past, despite the fact that macque didn’t have to coordinate the band into the mix. i was the 3rd performance in the show: the 1st performance went off without a hitch, and the 2nd performance, while a bit long and significantly confusing (at least from my point of view), went off without significant (i.e. “noticable from the audience”) glitches. between the performances, there was, apparently “somebody” (remedios rapoport? i know she was there…) singing the introductions in a pseudo-“Wagnerian-Opera” style, who, also, took a bit longer with the introduction than i would have liked.

and i forgot to mention that, under normal circumstances, the public would have been encouraged to join in the sacrifice with their own vegetables, but, so be it…

i read the last quarter of TBOT 11.1.1.1, ending with the phrase “and death to jocks”, whereupon i passed the paper that i was reading from to michael, and drew my sword.

in spite of all of the practice that i put in, when it came down to actually hacking into the pumpkin, the sword broke (the pommel broke off of the tang, just below the hilt) and i had to shove the pumpkin off of the stage to reveal the halloween candy, which, much as i suspected, was immediately pounced upon by a hoard of costumed, ravening pre-doodlehums. 😎

also, for the first time (i believe, ever) i managed to persuade hobbit to attend, and he ended up with the safety vest and radio that wouldn’t have shown if i wore them (because my cape would have covered them), and we all went to the red door for beer afterward.

i woke up this morning, extra early (7:30), and took moe’s car to les schwab, where they said they were going to fix the brakes, but when i got there, they told me that they can’t scan the ABS system unless the ABS warning light is on — despite the fact that, when they were talking with moe on the phone yesterday, they said that it wouldn’t be a problem, even if the ABS light wasn’t on — so they said they couldn’t fix anything and that i should take it to the dealer. 😐 so, while i was taking it to the dealer, i stopped to get coffee and discovered that my wallet was not in my vest, where it normally is, which, very quickly, put a damper on pretty much anything else i was planning on doing away from home today…

but despite all of the furor this morning, the afterglow from a successful vegetable sacrifice meant that the customer service people at les schwab didn’t have to deal with my rage over the fact that they said “there is nothing wrong with the car” when i know that there is…

i’ll catch up with them later. 👿

this is the first Public Ritual Vegetable Sacrifice i’ve held for a while, and because of the fact that it’s going to be part of the Trolloween celebration (the Fremont Troll was unveiled on halloween in 1990), it will be an abbreviated form of the ritual, in which the public will not be given the opportunity to sacrifice their own vegetables… until later…

i’m going to have to make sure to remember to mention that when i am doing the public reading, before the actual sacrifice… that’s a really good point…

this year i’m making a slight change in the sacrificial victim, as well. because of the fact that i am going to be sacrificing it with a sword, instead of the more regular gravity and ground, and because of the fact that i will be surrounded by people, i have actually filled the pumpkin with halloween candy, rather like a piñata, which i intend to spread as far as it will go. beforehand, i’m going to read a passage from The Book of Randy, which is Book 11 of the Books of Tina Chopp, in honour of Rev. Osiris Ranebo, although i doubt too many other people will recognise that fact.

they’re really desperate for people to help with crowd control – last year the parade included 150 to 200 members of the public, and the parade crosses two major thoroughfares, and according to the most recent email that was sent out, they’re still short 6 people. i tried to get ian interested, but he’s doing something else that involves a family that is staying at his house while they try to get into emergency housing.

THE PUBLIC IS ENCOURAGED TO ATTEND!

ETA: i just found a sermon that i delivered at a vegetable sacrifice in 2001 which i totally don’t remember giving at all… it’s too bad, too, because i would really like to remember having that dream… 😐