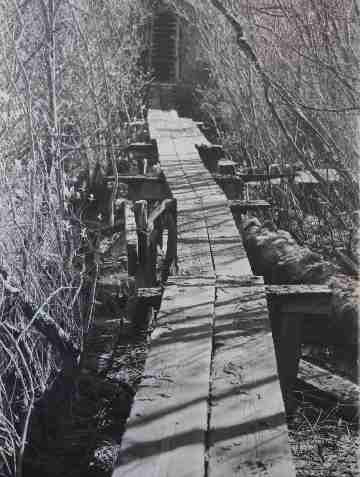 my finding the articles about fishtown the other day has caused a great deal of uproar in my feeble, damaged brain: very strong, detailed memories that don’t seem contected to any particular event combined with a general uncertainty about the whole period of time in question leaves me wondering what actually happened, and when.

these are things that i know concerning fishtown and goat island:

the first time i went to goat island was between 1982 and 1985, but i think it was around 1982. i’m not sure why i was going to fishtown specifically, but i apparently knew some people who lived there full time, or something like that. there was also talk of starting an “intentional community” (read “hippy commune”) on goat island, since it had a convenient abandoned gun emplacement that could be used as “temporary” (read “permanent”… it was huge, and mostly underground, thus dry and relatively warm) dwelling place. my sister kathryn and her boyfriend (who eventually became her husband) eric were planning on going as well, but due to some conflict with eric (which were quite common at that time), they ended up going to goat island separately, camped on the other side of the island, and i never saw them. i went with randy, and we spent two days trying to get to goat island. the first day we parked along the side of the road, basically in the middle of nowhere, outside of la conner, and hiked in to bald island, which was accessible by a rickety foot bridge. that night we camped on the bluffs on the west end of bald island overlooking shit creek (ship creek? my guess is that they were trying to be polite on the poet’s web site… 🙂 ) and got a ride with bex into fishtown the next morning. the second night we spent in robert sund’s cabin, which was a lot nicer than sleeping on the rocky ground. there is a drawing inspired by robert sund’s “wind letters” which i had seen there in my sketchbook. also there is a picture of a completed "wind letter" that is in my workshop at this very moment… that’s how profound an impact this place had on my consciousness. in the morning of the second day, singin’ dan and red dan and randy and i set out in one boat and bex set out in another boat, and we rounded goat island (because of the jetty, we couldn’t get to where we wanted to go directly). i was astounded to see a two-story house on the mud-flats. somebody had bought a 40 foot barge, moved his whole house onto it, and then parked it in the mud to the west of the island, where he made all the money he needed for the whole year by shoring up the monsterous pleasure boats belonging to obscenly rich people who figured that they could go anywhere in a boat that was given to impacting the bottom of the bay when the tides went out. we spent at least a week on goat island, with the conflict with eric escalating all the time. i remember singin’ dan impressing me with his knowledge of native plants and their uses. we built a huge fire in one of the abandoned gun emplacements, which burned for three days, and made a huge pot of stew with rabbits and wild cabbage and onions. we were going to return to fishtown through the fish-hole in the jetty, but we didn’t time the tides quite right (it’s difficult to approximate time when you haven’t seen a watch or a clock for a week), so we went into la conner instead, and from there we got a ride back to our car.

i also went to goat island with katharyn and ezra, when ezra was a tiny baby… maybe that was the time with the conflict with eric, i’m not sure… anyway, i remember it was during a break from the tech school, and i rented a canoe from the university boat house. we parked at the end of the road outside of la conner and had a straight shot from sandy beach to the island, along the jetty. because of the fact that i had timed it correctly, we hardly even had to paddle, the tide just carried us out with it – which was a good thing, because of the fact that we had ezra, we had a huge boatload of diapers and stuff, plus three people – well, two people and a baby – in a canoe that wasn’t really intended to hold more than two people, or one person and his camping gear. i remember, on the way there, we had, literally, an inch or less of freeboard. one good wave would have swamped us and abruptly ended the trip. i don’t remember that much about that trip (it is not at all surprising that a camping trip with the PHBFH would not stick in my memory), except for the fact that we made it and didn’t drown or lose anything important, like the baby. there is a list in my sketchbook, dated 850621-23 that appears to match what memories are there, but i seem to recall ezra being much younger, as little as 6 months old, at the time, so there may have been multiple visits with katharyn and ezra.

i went to goat island at least two more times. once with randy and jenny, where we actually canoed around in the area where the people who owned the house made their money. because of the fact that we were in a shallow-draft boat, we were able to go exploring in a lot of areas that are inaccessible otherwise. i remember we came up on this small island, and someone coughed (there was a fair amount of pot smoking going on), and, instantaneously, the sky all around was filled with great blue herons that had a rookery on the island. i got a feather from one of the nests that i still have, on the desk in front of me, at this very moment… 🙂

the last time i went to goat island must have been around 1985 to 1986 or so, and it was with jim. i don’t remember anything about how we got there, or how long we stayed. i do remember that jim was so afraid of appearing “gay” that he camped on the other side of the gun emplacement from me, in a place where we were not even in visual contact. it rained that night, and we moved further into the abandoned gun emplacement to avoid getting wet, and i remember trying to get warm, and rolling around in my sleeping bag, which i had parked next to a doorway, in the pitch dark of the night, and not being able to find the doorway i had gone to sleep next to… and then, in the morning, i discovered that i had rolled all the way across the underground chamber, diagonally, until i was next to the doorway that went out of the room on the other side, which was about 50 feet away. it didn’t rain the next night, and i slept under the stars, and during the night i found a watch on the ground, under a bunch of pine needles and leaf litter, that was probably lost by a previous camper.

i don’t know what ultimately happened to fishtown, and i probably don’t want to know. i also have no idea what ever happened to the people i knew there, with the exception of robert, who has since become both a noted poet, calligrapher and artist, and dead. after corresponding with frog hospital, i learned that bex and red dan are still in and/or around the mount vernon/edison/sedro-woolley area. he doesn’t know what happened to singin’ dan, though… oh well. it’s a shame that it had to end in whatever way it ended – i seem to recall logging and/or bulldozers and people with huge quantities of money who wanted to “develop” the area in 1988 or thereabouts, which was when i was in the middle of the failed bus project… another person i knew from that place and time was mauldiwarp moongate-climber, the person from whom i bought the failed bus project, but that’s another story… 🙂