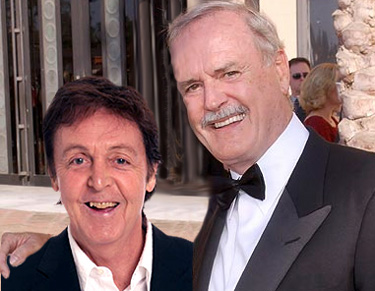 Former Beatle Sir Paul McCartney has announced he is to marry for a third time, this time to legendary Python star and himself three-time divorcee John Cleese.

While the details of the service have yet to be worked out Sir Paul confirmed that ‘Eleanor Rigby’ would be played during the ceremony, and when it gets to ‘All the lonely people, where do they all come from?’ spouse-to-be Cleese has promised to walk up the aisle in an appropriately spectacularly silly way.

The happy couple first met at a Divorcee Anonymous meeting, and found that they could share their desparate experiences of lost marriages and an unfulfilled search for a love to match their first betrothals, a quest each has embarked on for many years without success – until now.

The service will take place in New York, with Terry Jones giving the reading in a screeching harridan voice, Ringo Starr conducting the choir, who haven’t yet quite got used to his unique brand of syncopation, Stella McCartney providing decorative pineapples and Eric Idle singing a eulogy, which will be based on such delightful puns as ‘Always look on the bride side of life,’ something which both Cleese and McCartney have agreed to vow in church never to do again.

With both men contentedly well off, and with the wisdom of old age it seems like a marriage set to last although, just in case, the pre-nup runs to one hundred and forty pages.