this, needless to say, is not the way i have done business with people who needed printing in the past. usually i’ve found that when people write something down on a napkin, that some time has to be spent figuring out exactly what is needed. i told sally (one of the owners of edgewood tire, i think) that, and she agreed that it was not exactly the best idea, so i left my phone number and told her to have lamar give me a call.

days passed by, and lamar didn’t call me.

i stopped by edgewood tire again, and sally said that lamar said (already you begin to see why i was leery of doing this) that what was written on the napkin was what he wanted, and that i shoud just go for it. i still wanted to at least talk to the guy before i typeset something, but when i called both of the numbers he gave, and asked for lamar, nobody had any idea who i was talking about, so sally actually called lamar while i was standing in her office, and then handed the phone to me. it didn’t take long. he gave me the impression that he wanted them in a hurry, and suggested the word CASH should be in red. i asked him if he wanted any artwork, and he said that the words should take up the entire card… in fact, he said “if there is any room left on the card, fill it with the words i gave you.” i asked him if he needed to see a proof copy before i sent them out, and he said no (which is another BIG RED FLAG in the “normal” printing industry). i said i would see that his need for cards was met, and that if he needed any changes, we could talk about it for the next time.

so i whipped out a card that filled as much of the available space as possible with words. and sent them off with faster than normal delivery service… which was a mistake, because UPS couldn’t find my address (which is a down side to living in the “unincorporated” part of king county) and the day they were supposed to deliver it, the status suddenly changed to “we don’t know where you are, delivery postponed indefinitely” and i actually had to go down to the UPS package center in pacific to get it.

armed with the business cards, i, once again, tried calling both of the phone numbers on the card, and got the answering service for pacific auto glass, who didn’t know who lamar was. i began to think that i may never see payment, but i took them to edgewood tire and said that lamar could pay for the replacement gear that my new car needed, and sally said that was an acceptable arrangement, so i left the cards with her.

but i got to thinking… i actually have a junk car that i need to get rid of, so i tried calling them again. this time, there was an answering machine that said that if you need a new windshield or have a junk car, leave your number… so i did.

this time lamar actually called back. we made all of the arrangements for him to pick up(!) the old ganesha the car before he asked for my name and phone number (heh heh). when he found out who i was, he immediately put in another order for 1000 more business cards. he really likes them, and says that the word “cash” is exactly what he wanted… 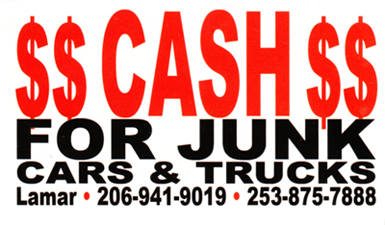