after the panto ended for 2011 (it starts again on saturday, and runs for two weeks. get yer tickets now ’cause they’re selling out fast!) i got started making some hobo nickels. they’re not classic hobo nickels, of course, but they’re in a similar vein… and, hey… they’re only a nickel… and, as long as you don’t try to use the result as “currency”, they’re perfectly legal. 8) i broke most of my jewelers’ saw blades on the first couple of them, getting the technique right and re-adjusting my fingers. i went out to tacoma screw, to get more jewelers’ saw blades, and they didn’t know what i was talking about. i went to rockler, and they had them, but i’m not sure they’re the right ones, because they say they’re only for wood… and they’re 28 teeth per inch, and i’m pretty sure that the ones i need are more like 35 to 50 teeth per inch… i’m pretty sure that if i made the trip to hardwick’s, in seattle, that i’d be able to walk in and say i needed extra-fine jewelers’ saw-blades and they’d point me towards a bin of ’em… i went in there one time, and i said i was looking for a vice, and the guy asked me if i had considered smoking… 😉 i made nickels like this A LOT, between 1986 (when i got out of the tech school, and realised that i could make them) until 1994, when i started having to limit my workshop space because of where i was living. they just kind of faded into past memory, and were only re-realised a few weeks ago.

i put in the order for another 20 dozen aparajita on the 15th. i still haven’t heard anything, but they are making the incense to order (SQUEEEEE!!!) so i’m not being as paranoid about it… i’m still being paranoid (after all, it’s sort of a natural state of existence for me), just not as much. i’m probably going to email again on friday if i still haven’t heard anything by then. 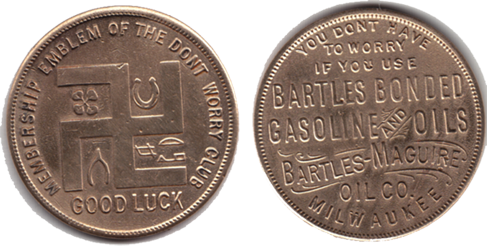 i got this good-luck token in the mail the other day. it’s a little bit bigger than a US quarter, or a little smaller than a US half-dollar. i didn’t remember where it came from, at first, and because of the fact that i bid on it at ebay, it didn’t come from anybody i knew, or from an address with which i was familiar, which was pretty exciting, until i remembered where it came from.

after having gone to meet her, i figured out where the lady who knew who i am knows me from: she knows me because i am associated with Howlin’ Hobbit… although she was really disappointed when i didn’t drive up in my elaborately-painted art-car she was just as happy to take a picture of me wearing my hippy-hat

we spent christmas eve driving: we got up around 5:00 or so, and drove to salem, oregon, then we drove north and stopped just south of portland, then we drove into portland and visited a couple of different places before heading back, around 7:30 pm… by the time we got home, i had had about as much driving as i could stand for a while, so i spent most of the rest of xmas at home, being a hermit-crab. we took our annual trip to double-bluff off-leash dog-park on new-years’ day, and got there just as a polar-bear swim was getting over, which was kind of odd, because normally we are the only ones there on new years, and this year there were huge crowds of people, and music blaring… and an ambulance…

2 thoughts on “what have i been doing the past few weeks?”