so, the battle of the computer is largely over, but there are a few weird things, that i suspect are going to be more and more annoying as time goes on and they don’t get fixed, but at the same time, they are practically impossible to describe, and i don’t know how i’m ever going to fix them if i can’t even describe them reliably.

there have been some peculiarities that i have been able to adjust: my default browser changed from firefox to rekonq in the System Settings, but nowhere else, and it went back to doing what it was supposed to once i changed it, but i had to check two or three other places, because it wasn’t changed in my email client or ANY of my browsers.

also, immediately after i recovered from “the disaster”, i noticed that some, but, curiously, not all of my email filters weren’t working. when i went into the “Configure Filters” dialogue, all of the filters were there, but they didn’t do anything. once i re-established the things that each of them were supposed to do, they all worked the way they were supposed to.

however, there are some things that worked fine before, are non-functional now, and i don’t have the first clue how to fix them:

before the disaster, when i opened a URL from my email client, it immediately switched to the browser, and proceded to open the URL without making any sound. after the disaster, it opens the URL in a new browser window, but it doesn’t immediately switch to it, and sometimes (but not always) it makes a “swishyswishy” sound that i haven’t been able to figure out where it’s coming from, and (naturally) haven’t been able to figure out how to turn it off.

before my disaster, i had the ability to change my volume by pushing buttons on my keyboard, but since the disaster, my sound system settings are completely wonky, the buttons on the keyboard no longer work, and i can’t figure out how to make them right: instead of having two channels in my “Volume” settings (in the systray), one of which controled the volume for everything, i have three, or four if there’s a youtube video in my browser, and one channel controls the settings for the system bell, another channel controls the volume in amarok, and one channel controls the volume in the youtube video… i believe that, when i’m using something like VLC Media Player, i can show another channel in my mixer.

there’s one, in particular, that i already find fairly annoying: i have a “K” menu (rather like the “Start” menu in windoesn’t, but not so confusing) in my task bar, which has a “Recently Used” tab – 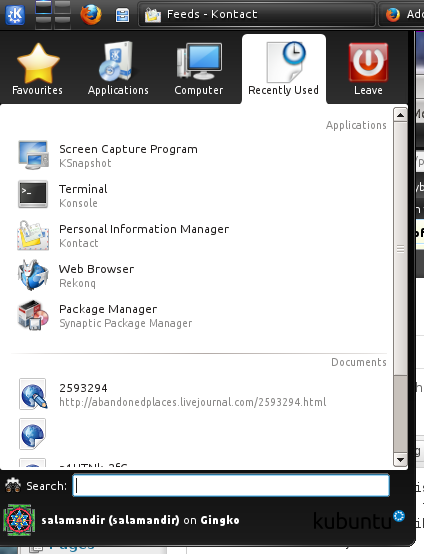 i have a “0 B Removable Media” that appears to be a floppy drive in my devices menu, but i don’t have a floppy drive at all… i seem to recall being able to turn drives that i don’t have off in the devices menu, but there’s nothing in System Settings -> Removable Devices that does anything. also, my secondary internal drive, which should mount automatically at boot time, doesn’t actually mount until i click on it, at which point it demands a password before i can access any of its contents.