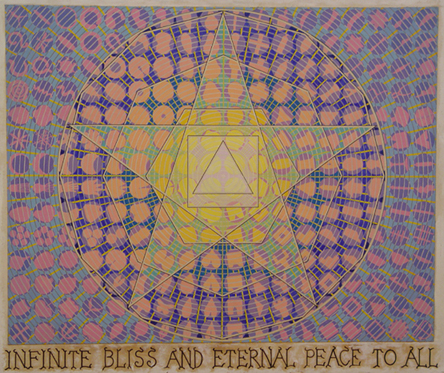 Elwood Decker: A Path to God

i originally heard The Bobs song “Elwood Decker” in 1996 or 1997, thanks to my my beautiful wife (who is THE Bobs fanatic), and immediately wondered who the hell he was… so i proceded to find out.

after some preliminary internet searching, i wasn’t able to find much about elwood, but i found a connection between elwood and a guy to whom i may be related, norm hammond. it turned out that norm hammond posessed all of elwood’s paintings, and it turned out that they had just hung a gallery showing in the old train station in oceano (the bobs changed it to nipomo, which is in the same neighbourhood, but more euphonious) of elwood’s paintings. norm sent me a bunch of reproductions, one of which is currently hanging on the wall behind me. i suggested that elwood really should have a web site, and norm said that he was working on several avenues to publicise elwood — at the time he was in the process of writing a book about him — but that he had never even thought of a web site. i suggested elwooddecker.com and (although i hadn’t expanded the business to the point that it is now) suggested that i could register it for him and build a web site. he said that he would think about it, but he was more interested in writing at that time. i haven’t heard from norm since then, but that’s okay, because it appears that elwood got a web site anyway.

i also put together a one-page biography of elwood, with one of the pictures of him that norm had sent me, and gave it to richard bob at the bobs christmas show, the last time they did the show at jazz alley (1997? 1998?).

of course that was some time before i got involved with the cirque de flambé and the fremont philharmonic, which would, eventually, get me to the point where i am friends and colleagues with matthew bob… 8)

cinderella finished its first week of performances. there was a rumour that we were getting reviewed by the seattle times saturday night, but it snowed, and the reviewer didn’t pick up the tickets he called and asked for. of course that means either that he didn’t come, or he did come but didn’t want to alert us to his presence, which makes me wonder why he called and requested comps in the first place. apart from that, the performances are going reasonably well, no forgotten scenes, missing actors or long dead spaces. there have been a few missed cues and short dead spaces, but we haven’t actually performed this show since july, and we’ve got two more weeks of performances. unlike previous shows, i’m pretty sure we’re going to get it right several performances before we close.

i really like my new host providers… no, i REALLY like my new host providers! their helpdesk techs have already been a lot more help than my previous host providers ever were (although somewhat more difficult to understand, because i get the impression that they’re outsourced to india, or mexico or some place like that): they’ve already helped me with importing a database, and fixing a CGI script, and apart from the fact that they provide several hundred times more disk space at less than half of the cost, they’ve also got a lot more user-based control panel, which means that i am the one in charge of creating and maintaining things like databases, domains and subdomains, FTP accounts, and so forth, plus they’ve got services like several different choices for a shopping cart, several different choices for marketing, including some of the most impressive web stats i have ever seen, and probably a lot more stuff i still haven’t discovered yet. this is going to make re-designing the hybrid elephant web site a lot easier! also, my impression is that part of the reason why they make it so easy is because it’s designed to be resold, and to that end, i’ve already got a couple of prospects for domains hooked up. also, i called and talked with ezra, and gave him 1gb of web space and talked about making a BaldManIsWatching.com or something like that, the idea of which he actually sounded really interested in discussing further.

also, really good potential news that may just be a fantasy at this point, so no details until it is more of a reality.

i had a really depressing dream: i was in downtown seattle for something, but i was living in a homeless shelter and had practically nothing. the shelter was a big warehouse that had been divided up into “camps”, with walls about 4 feet high, so you could see over them fairly easily. the shower was a tiny space that was barely big enough to turn around in, and the plumbing was falling apart, so that if you adjusted the showerhead, the whole thing fell apart. i had just returned to the shelter from whatever it was that i was doing, and there was nobody there, which i figured would be an ideal time to take a shower, but as i was getting into the shower, a whole bunch of people that i didn’t know showed up and so i had to take a shower in the open, in the presence of a whole bunch of people that i didn’t know… and, of course, that was also exactly the same time that i discovered the fact that the shower plumbing was falling apart, so all the other people got wet and irritated with me.

moe and i went to see The Bobs at the Kirkland Performance Center last night, and some time between the time that we arrived and the time that the bobs took the stage, something (i suspect that it was the fog machine) invaded my throat and irritated it enough that it was difficult to swallow. it lasted most of the night, which didn’t help the dream any at all, and the result was that i woke up in a lousy mood this morning. it also didn’t help that we are going to portland today for x-mas with the in-laws. usually x-mas is a mellow time that we can get away from the normal, dismal miasma that we live in, but the fact that i woke up in a lousy mood today does not make me enthusiastic about going to visit moe’s extremely horrendously dysfunctional families, regardless of how mellow they are when they’re all together. i have developed the opinion that the in-laws base their lives on some sort of twisted television situation comedy, except that, as far as i’ve been able to tell, they don’t watch sit-coms on TV to begin with, and even if they did, the “comedy” writers for their show are on drugs or something, and their comedy isn’t anywhere near as funny as it would have to be to be tolerable as an actual family. the only thing that makes x-mas with the in-laws even remotely acceptable is that it’s not my own family.

the bobs put on an excellent holiday show, which was titled “Too Many Santas”. in spite of the title, it wasn’t an exact reproduction of their “Too Many Santas” CD, and actually contained a number of songs that i have never heard before, including “Imaginary Tuba” which was outrageous, and described my childhood quite accurately. it was really awesome to see matt in his venue, doing his stuff, rather than seeing him in my venue while i was doing my stuff, and i also got the chance to talk with richard and amy for a little while.

as i’m going to be in portland tomorrow, there’s a good chance that i won’t get the opportunity to post anything, but if the occasion presents itself, i’ll try to post something.