obama is president, but we still have the state governor’s race, which probably won’t be finally decided for several days. anybody but dino rossi would be fine with me.

i knew tuba man, although i knew him as ed, the guy who talked like john wayne… he and i were in the seattle youth symphony together, and we attended pacific northwest music camp for several years before it became the marrowstone music festival. my favourite recollection of ed was one year at the SYSO auditions, ed had gone to the other end of the building and was warming up in the stairway, and the people giving auditions had to ask him to shut up because he was playing loud enough that you could hear him all over the building. this is a sad, sad day for seattle. 8( 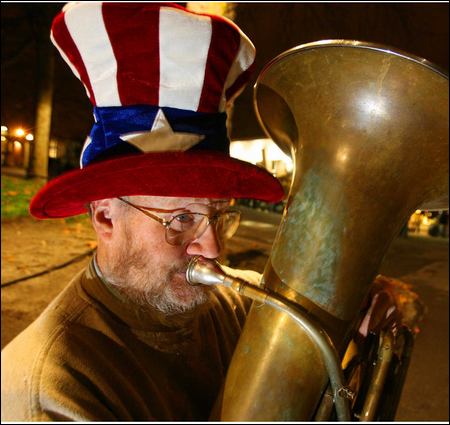 OLD-TIMERS who have seen it all say this is the worst year for Seattle sports.

The Mariners finished in the cellar. The Huskies, winless on the gridiron, exemplify college football futility. The Seahawks are in a tailspin. And the Sonics split, leaving a hole where the heart of Seattle pro basketball once beat.

To this list I pass along another loss, perhaps the saddest: Seattle’s most visible, beloved and melodic sports fan — Tuba Man — is dead.

Seattle knew Edward McMichael by sight or sound, the bespectacled guy with the wispy beard and floppy Uncle Sam and Dr. Seuss hats. For decades he breathed life into his shiny brass instrument, outside city sports venues.

On Oct. 25, police say, McMichael, 53, was near a bus stop in the 500 block of Mercer Street when thugs attacked, beating and robbing him after midnight. He was taken to the hospital for head wounds and was home recovering. But he died sometime Sunday or early Monday.

“We believe his death was directly connected to the assault,” Seattle police spokesman Sean Whitcomb told me Monday night. Gang and homicide detectives were handling the case.

Two juvenile suspects were in custody, and detectives are looking for three other people. “This is tragic,” Whitcomb said. Police are seeking the public’s help.

“Ed passed away overnight,” Ronny Chesvick said Monday. Chesvick works at the Vermont Inn, where McMichael lived. “Ed was a great guy. Funny. Friendly. Easygoing. We all loved him.”

When the Mariners made a storied postseason run in 1995, McMichael played “Happy Days Are Here Again,” outside the Kingdome. After the Sonics collapsed in the NBA playoffs against the Denver Nuggets in ’94, he played a dirge to match the shock that fans — rumpled and morose — felt as they staggered away from Seattle Center.

When the Seahawks surprised the world by rumbling to the 2006 Super Bowl, Tuba Man filled the air outside Qwest Field with musical ecstasy. Sports Illustrated called him a “super fan.”

Hundreds of thousands of Seattleites have walked by McMichael outside sporting events — and local stages. He loved to play outside the opera and theater houses. To play the tuba, he told me, was to be alive.

A native of the Seattle area, McMichael graduated in the early 1970s from King’s Garden High School. He was in the band at North Seattle Community College. He later brought his talents to one local ensemble or another, from Seattle Youth Symphony to Bellevue Philharmonic to Cascade Symphony.

He could have made a living in a band but chose to play for tips outdoors. Even in the rain, he would set a bucket at his feet for tip money, right next to jugs of his favorite drink, either V8 or Sunny Delight. Then he would purse his lips to his contrabass tuba — “My baby,” he called it — and create low, noble sounds.

McMichael appreciated when people would stop and listen, or leave a buck or two. But for him just meeting folks was the biggest reward. “That’s what I value most,” he said when I caught up with him last year. “People.”

In recent days, people wondered where he had gone. They hadn’t seen him outside McCaw Hall — his usual spot on opera nights. He wasn’t outside the Seahawks game Sunday.

Police said the five toughs who set their sights on McMichael also robbed and attacked two teens around the same time, asking for $5 and to use their cell phone. When the teens said the battery was dead, the attackers jumped.

The thugs also seized McMichael, who was “on the ground in a fetal position trying to protect himself as the group was kicking and punching him on the ground,” wrote a police officer who pulled up to the scene and saw the attack.

Two of the lowlifes, both about 15 years old, were caught. Three fled.

A police report said a ring snatched from McMichael’s finger during the sickening, ruthless violence was recovered. I wondered if it was his beloved 1979 Sonics championship ring, which he wore on his left hand.

McMichael was admitted to the hospital for a couple of days. A brother flew in from Florida.

Neighbors last saw him Saturday at his apartment. He had a warm twinkle in his eye but was very groggy from pain medication.

On Monday morning, his brother went to the apartment to take him to a doctor’s appointment, but he wasn’t in the lobby. So a manager went to McMichael’s room. She opened the door and found him lying peacefully on his bed, surrounded by sports clippings and memorabilia.

“Ed touched so many people,” said Meuy Saelee, the manager at the Vermont Inn, who — like sports fans, friends and strangers, young and old — will never forget him.

This quirky artist, talented as he was memorable, brought sweet music to big-city life.