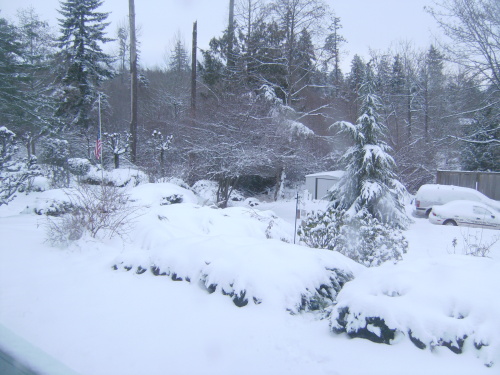 cinderella finished its second week of performances amid more snow than i’ve seen around here for a long time. it started snowing on thursday and finally quit yesterday, but there’s a prediction that it’s going to start up again tomorrow… i took the train from tacoma to seattle saturday (quite an enjoyable trip, by the way) and stayed at heather and stuart’s place saturday night. my windows computer is broken (again) – it appears to be the same sort of thing that it was the last time, in that it appears to be a power supply issue, so i’m hoping that i can replace the power cord (again) and everything will be back to normal, but i’m not holding my breath. i took my mac laptop with me on saturday and recorded both shows and 5 potential demos for the fremont phil, which i have since burned to a DVD (although i didn’t have to, because even with several gigs of space taken up by the recordings, i still had more than 120 gigs of free space left!!!). sunday i did another show, without a trumpet player, because our regular trumpet player, teacher ted, thought he was going to fly out early sunday morning (fat chance – all flights out of sea-tac were cancelled due to the snowpocalypse), and our substitute trumpet player, a high school student named shimpuku, was stuck north of lake washington. after the show, i got a ride home from macque and norma, who have a four-wheel-drive jeep with chains, which is a good thing, because the roads were almost totally impassable due to seattle’s having this weird thing about encouraging compact snow and ice rather than salting the roads. the national weather service prediction is for precipitation, most probably snow, at least 50% (and as much as 80%) of the time until thursday, and has predicted snow for 8 out of the past 10 days. we had around a foot and a half of snow, and had to dig the car out, and then dig the driveway out before we could go anywhere yesterday. when we finally got dug out, we went to buy tire chains for moe’s car, and on the way discovered that the car was overheating – or so we thought, it was actually the temperature gauge that died – not the thermostat, the temperature gauge in the instrument panel, fortunately, because if it had been the thermostat it would have cost several hundred dollars to fix, but because of the fact that it’s in the instrument panel, it’s actually safe to drive the car even though the temperature is wonky. of course, the first thing that happened this morning is that moe decided that it wasn’t snowing right then, so she would try to go in to work, and on the way she drove over something that broke the chains, so she had to stop the car in the middle of highway 99 (thank gawd she wasn’t on the freeway) and take them off, leaving her with a big, empty minivan with no traction, somewhere between home and mercer island at 6:30 in the morning.

anyway, the cinderella performances went amazingly well despite sunday’s lack of a trumpet player, and saturday evening, when we weren’t expecting anybody to show up, we actually had almost a full house, including a whole pile of noisy kids which was almost exactly like OCF. Fremont Philharmonic dot com is now in existence, but it doesn’t have much there at this point except for stuff that only applies to members of the fremont phil. also i’m talking with macque and bfly about consolidating all of the fremonstor theatrical organisations on one host.