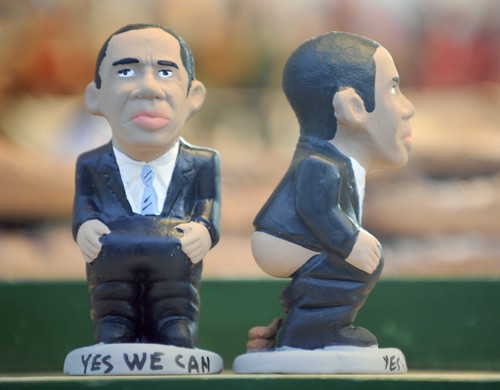 they keep coming up with more and more truly weird things that they do to appease their “god”. once i think i’ve seen the weirdest they have to offer, they come up with a new (or, in this case old) tradition that so totally blows away everything else i’ve learned about “christians” that it’s incredible.

apparently in the catalonia region of spain, catholic “christians” have a tradition of hiding “caganers” in nativity scenes and then challenging their friends to find them. what is a “caganer” you ask? it’s only a ceramic statuette of a well known person, like barack obama, or tennis player rafael nadal or the pope, in the act of defecation. “the figures symbolize fertilization, hope and prosperity for the coming year.”

i’m sorry but that’s just funny… and the fact that it’s associated with “christianity” makes me wonder how they think they can say anything against the “strange” traditions other religions practice.

Punk Rock Flea Market yesterday. made $50, which is not too bad, but had to spend $10 for parking, because i had to leave at 5:00 because of another gig. i figure 5:00 was about when i would have packed up anyway, but it was nice to have my car easily accessible, even if it was 3 blocks of one-way streets the wrong direction to pick it up once i was packed up. i had to drive about 10 blocks, including around one block twice because i got in the wrong lane the first time. it was really irritating, but i got through it somehow. and it was really nice to drive up, practically to the door, load out, and drive away, rather than having to carry my boxes downstairs, across the entire building – avoiding all of the other people who were also loading out, across the parking lot, and then having to wait while everybody else got loaded out and out of the parking lot before getting to go.

the other gig i had was at the gage academy of art, which used to be cornish, and before that was a catholic school associated with st. mark’s cathedral, on capitol hill. it was snake suspenderz doing two sets out of four (one set on, one set off) while another band, the KlezKatz, performed… with thaddeus, our trombone/guitar player). i wasn’t really expecting a lot from that gig, because i knew that the other snake suspenderz are dirty old men who love to hang out in a warm room and play with naked people just so they can ogle the naked people… well, okay, i’m one of those people too… and, goddammit, i wish that guy hadn’t put that empty easel right between me and the HAWT naked female model with dreadlocks and tattoos. i really didn’t have time to look appreciatively, because i was too busy playing, and by the time i was finished playing she had already put her clothes on again.oh well… 8/

anyway, through some SNAFU about which i didn’t get the entire story, thad actually cut me a check for $50 yesterday, so in all, i did pretty much exactly what i want to do ALL THE TIME and ended up $100 richer out of the deal. now if i could only have four or five of those days every month, i’d be fairly happy.

i got a phone call from fred hawkinson yesterday. he wanted to talk about the possibility of teaming up and getting a job in a music store, or, conversely, opening our own music store, with him doing brasswind repair and me doing woodwind repair. there’s nothing more than just the fantasy at this point, but the thought of actually doing musical instrument repair alone should be enough to keep my spirits up for a while.

now i have to go and play with the ballard sedentary sousa band for the phinney winter festival, and after that i might play with the banda gozona at a gig on alki point, but i’m not sure about that yet.