no, this isn’t going to be another gripe about my host provider, although it starts out seeming that way, bear with me…

of course, it didn’t work, and i don’t have services provided by that service provider any more anyway, so i decided to cancel my twitter account. after all, i never used it, and i only signed up for it in the first place because i thought it was going to facilitate something that, in fact, it didn’t. however, i found that it’s not so easy to “cancel” your twitter account. 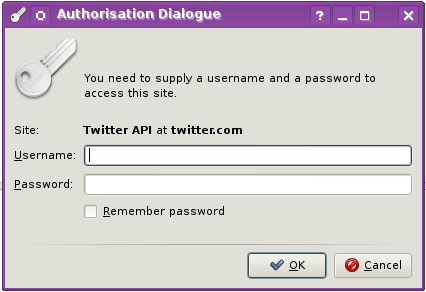 so i decided to “deactivate” my account, since there doesn’t seem to be any way at all to cancel it outright. it was actually deceptively simple. i say it was “deceptively” simple because, although i did it this morning, and my computer has actually been shut down for most of the day, i still keep getting an “authorisation dialogue” from something i didn’t install, but which says that “twitter api” at “twitter.com” wants access to something on my computer…

it’s 11:00 at night, and i don’t have time to try and figure out what’s going wrong, but you can bet that i”m going to have a stern conversation with a couple of tech-support toadies at twitter tomorrow.

i am writing this from portland. to be specific, i am writing this from the back yard of my mother-in-law’s house. when i booted up my battery-powered laptop, it automatically found a network, and logged me in. it also found 3 other networks, for which i don’t have the password stored in my computer.

my impression is that i can go pretty much anywhere in pretty much any metropolitan area in this country, and be able to log on to the network with not an awful lot more than a password. this particular network’s password was (probably) supplied by my wife, who set up her mother with wireless ethernet last christmas, but it shouldn’t take any more than asking someone to be able to log in to any network. i just heard someone on the radio this morning who was saying that, inevitably, they’re going to include wireless networking, or wifi hotspots in new buildings, the same way that new buildings currently are wired with electricity, sewers and running water. i shouldn’t have to do more than ask someone to get free access to internet, in the same way that i shouldn’t have to pay someone to get water, or go to the bathroom.

and yet, that’s what google – the “don’t be evil” company – is out to make happen. it’s not bad enough that google anticipates the keywords that you type in, based on information that they have gathered from your previous searches, or that google is willing to sell that information about you to other people without your knowledge or permission, but on top of all that, they want to make you pay to get what should be equally free to everyone.

yeah, i know that you can go into a restaurant and get a fancy glass of water, but you’re also going to get quite a bit more than that in a restaurant, if what you’re starting out with is water, and when water is all you need, paying for all of that other, admittedly desirable, stuff, is starting to be more of a “luxury” item than anything else…

here’s an option: give free high speed internet to everyone, but let google and verizon build their “private, for-pay” internet and have them deliver that “private, for-pay” internet in a way similar to that in which fine food is delivered at a restaurant, and see how long it is before people realise that “private” and “for-pay” means that regardless of how raunchy, evil and nasty they want to be, someone is going to be aware of their actions.