so it’s time to feed the snake again.

the last time i fed the snake, i went down to the place where i buy live mice, and they were in the middle of packing up, in preparation for closing their business down permanently. they told me that they were still going to be in the business of providing rats, mice and other vermin for feeders, but they couldn’t afford to keep the business going. they gave me a phone number, which i labeled “feeder mice james”. 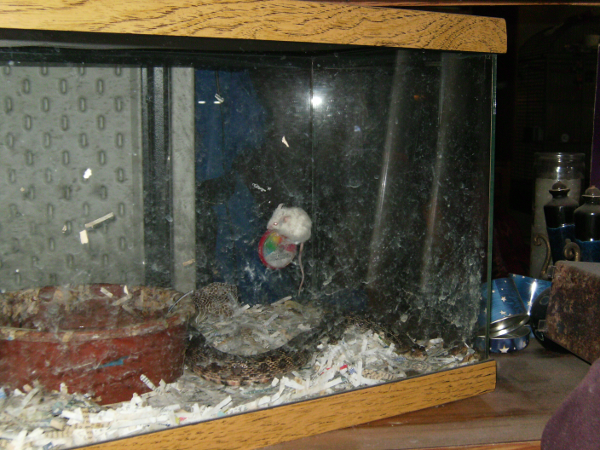 i called the number yesterday. there was no answer, but a message said that if i left my number, they’d call me back. they never called back. this doesn’t look promising.

i called again this morning. someone answered, and they knew who i was, which is as promising as i could have expected. they said that i should come over and get mice, so i did. i went over to this random house that i have been driving past on a more-or-less regular basis for about five years, and picked up three adult mice. so far, so good.

i get home and put one of the mice in the tank with the snake. he hisses at it, and strikes at it, but is obviously not interested in the mouse as food.

currently, the mouse has taken refuge on top of the thermometer in the tank, which is probably not the best place for hiding, but who can say what goes through the mind of a prey species when they are hunted in a closed environment.

he may be interested later. one time it took four days to convince him that mice were, actually, food. once the first one goes down, the others usually follow fairly quickly. however, there is, always, the possibility that he is just not hungry, in which case he usually develops a relationship with the mouse, and they end up sleeping together. at that point, i have, in the past, just returned the mice to the store, and come back for them in a couple weeks. but because of the fact that i am now purchasing the mice from some random person, i wonder what his policies are, on accepting “returns” of “uneaten mice”. 😐