everybody is jumping on the bandwagon, which is normally something that causes me to examine my preferance towards something a lot more closely, but in this case, i think it is justified: doonesbury’s 40th anniversary. 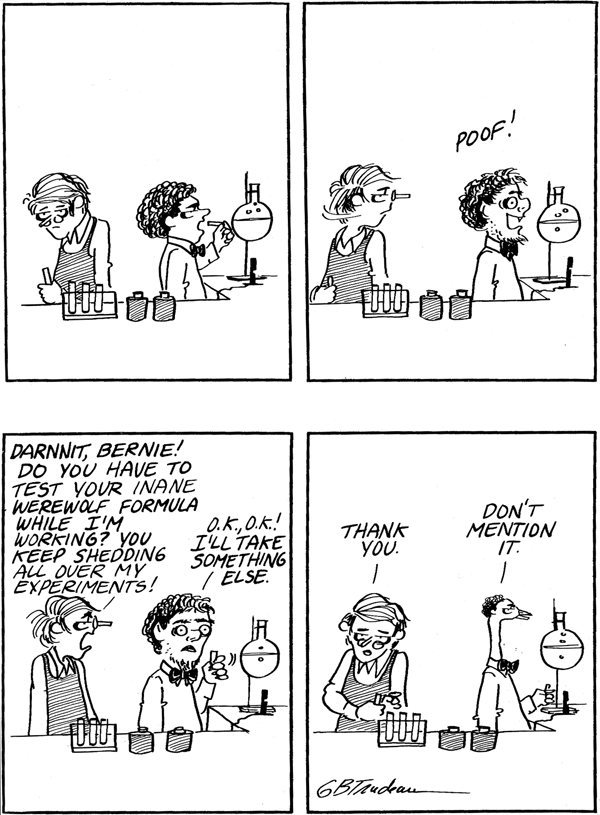 this was one of the first appearances of a character that i haven’t seen in a loooong time, named Bernie. i don’t know what ever happened to him, and as far as i can tell, there isn’t any mention of him at Slate (which is what you get if you type in www dot doonesbury dot com), but Bernie has been an example of what i wanted my life to be like ever since i first encountered him.

mark slackmeyer and i had a rocky relationship at first. when he appeared on the scene, i was around 10 years old, and i was intent on not becoming one of those long-haired drug-taking hippie-radicals that were all the rage in the 70s… but then, a few years later, i went to college and my parents rented out my room, which meant that, when i came home between sessions, i had to sleep in the garage – mark slackmeyer spent at least one summer in his parents’ garage, for similar reasons. and as i got a couple of years into college, and discovered cannabis, LSD, and other “drugs” there came to be even more similarities between me and mark… 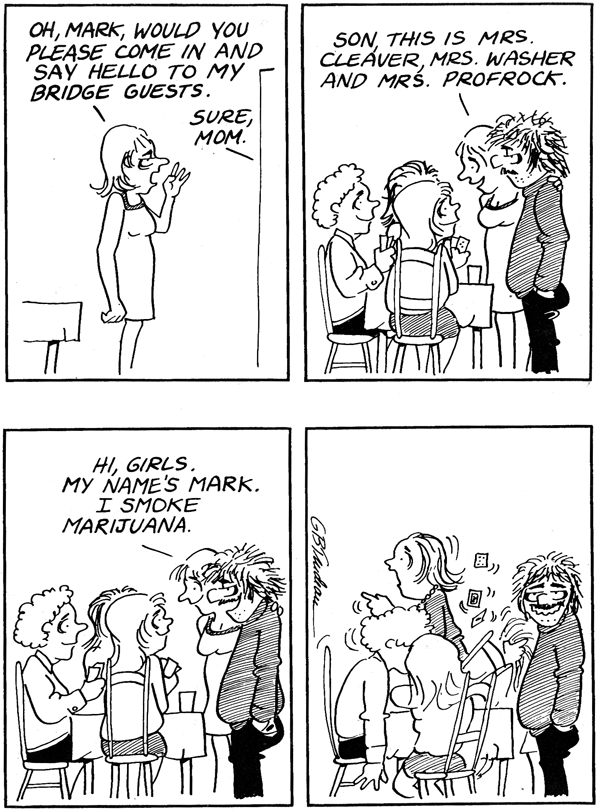 i have all of the original doonsebury books around here somewhere… these two were scanned from the second one, called “The President Is A Lot Smarter Than You Think”.

Ms. Gates: ‘Bill does not use a Mac’ – that’s a definte change compared to when i was working at microsoft, from 1995 to 1997. at that time, it was well known around the campus that bill had a mac (among other things) on his desktop at work. if he’s not even interested in checking out the competition any longer, then my guess is that mickey$oft is not long for the world.

bill is no longer actually associated with the everyday operations of microsoft any more, so maybe he has decided that “keeping track of the competiton” isn’t as necessary, but at one time, bill was under the impression that mac was definitely worth keeping track of.

of course, it may have something to do with the fact that these days mac is headed in an entirely different direction than bill is interested in: while both companies are still major competitors, mac has developed a taste for phones, and tablets, and portable devices, while microsoft is more interested in the back end, servers, networks and that kind of thing. it could be that this is the reason bill no longer uses a mac.

i wonder if bill uses linux… i would expect probably not, but who knows?