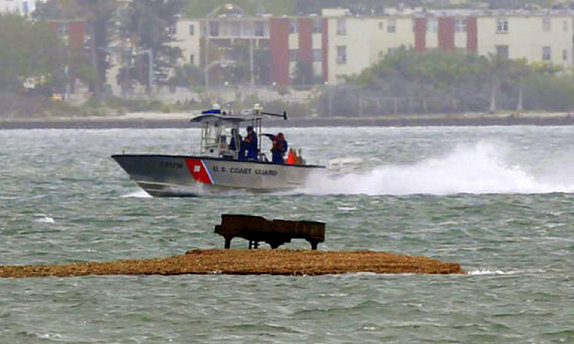 Call it the latest piano bar, a large-scale mystery, or a whole new set of Florida Keys.

In Miami’s Biscayne Bay, a grand piano has appeared — perched on the highest point of a sandbar.

“We don’t know how the piano got out there, we don’t know who’s responsible for putting the piano out there and at this point it’s clearly a mystery,” said Jorge Pino of the Florida Fish and Wildlife Conservation Commission.

And for now, it’s staying put. Authorities told CNN they have no plans to remove it.

“What will probably happen is that the piano will just disintegrate because of the salt water and the salt air,” said Pino, adding that it will not harm the wildlife.

The finding has struck a chord with residents and tourists, inspiring some to board their boats and check it out. But if they’re planning to perform a concerto, their hopes will likely fall flat.

“This piano’s so banged up you can’t even bang out any tunes on it,” reported Andre Hepkins of CNN affiliate WSVN, as he stood on the sandbar attempting to tickle the ivories.

As word spread, theories took off. Was it a publicity stunt? A music video gone bad? A frustrated musician? A jilted lover trashing an ex’s instrument?

A Miami New Times blog offered explanations such as “The Little Mermaid was not a work of fiction” and “the powers that be are trying new tricks to get your attention about the end of the world.”

Pino has his own ideas. “The person who did this obviously did it as a prank in my opinion,” he said, “and they are getting exactly what they wanted to get, which is the notoriety of knowing that their story went viral.”

It is illegal to dump things into those waters, Pino said. “If you’re caught doing it, you can be arrested.”

But for now, the Department of Environmental Resources Management has not begun an investigation, spokesman Luis Espinoza told CNN. “We’re keeping an eye on it, looking into how it might have gotten there,” he said, adding that an official investigation is “possible.”

In November 2008 a piano was mysteriously discovered in Harwich, Massachusetts, by a woman who was walking a trail in the middle of the woods. That piano — an upright, not a grand — perplexed authorities. A CNN call Wednesday to Harwich police to find out if that mystery was ever solved was not immediately returned.

Biscayne Bay is home to commerce and tourism. The National Park Service describes it as “a shallow estuary, a place where freshwater from the land mixes with salt water from the sea and life abounds. It serves as a nursery where infant and juvenile marine life reside.”

Pino said the piano was found on the sandbar well out into the water, less than half a mile from the shore. “It’s amazing that somebody would go thru the trouble” of hauling “a 650 pound piece of equipment” out that far — even one that’s “not in good shape,” he said.

“We know of a car… that somebody years ago dumped into the water, and the vehicle stayed there. And, as it turns out, the vehicle is quite the habitat for lobster now.”

Pino added, “There’s odd things in the water all the time — shopping carts and tires and all kinds of stuff that people just decide to dump out there.”