i’ve been spending way too much time futzing about with the computers, and need to do something else some of the time. 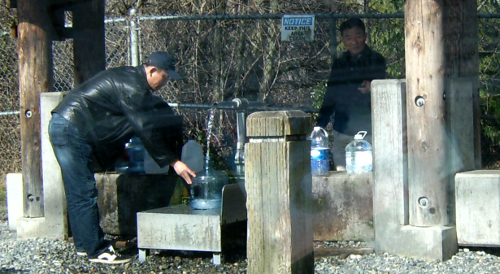 to that end, i’m probably not going to spend more than a couple of hours or so in front of the computer today, because of the fact that i’ve got a bunch of stuff to do. i’ve got to drive to marysville (approximately 1½ hours each way), to pick up business cards from the printer. i’ve also got to take the empty water bottles up to the artesian well to fill them, which is in between here and marysville, so it’s convenient to do both at the same time. then i’ve got to package the cards and ship them to the guy who ordered them.

then, later on, i’ve got a fremont phil rehearsal, which usually gets out at 9:00. the moisture festival is at the end of the month. counting today’s rehearsal, there are only four rehearsals left until it opens, which is cutting it really close, especially considering that pam, our clarinet player, quit earlier this year.

NASA Scientist Claims Evidence of Alien Life on Meteorite – but at the same time, how much do you want to believe FAUX News, especially considering their reputation these days?

Mass. company making diesel with sun, water, CO2 – what do you bet this is the last time we’re going to hear about these guys?

How We Train Our Cops to Fear Islam – these guys that teach anti-terrorism workshops to cops are the primary reason there are so many innocent people who get worked over by the cops because they have the wrong colour skin or act strangely.

Wisconsin Legislators respond to prank call by making it illegal – um… it’s a little too late for that, isn’t it?

Seattle farmers market features medical marijuana – one step closer to the inevitable point when our Holy Vegetable can be Sacrificed proudly in public.

Putting Homeopathy Into Perspective – any sufficiently advanced (or inadequately explained) technology is indistinguishable from magic… it doesn’t make me any less skeptical, however.