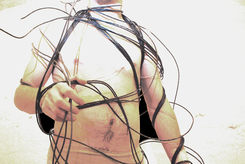 Live at the Film Forum

Dancer/choreographer Ezra Dickinson and musician/sound-artist Paurl Walsh create a visual and sonic environment that is directly and kinetically linked to the performance onstage. Employing new technology, Dickenson’s movement becomes the instrument through which Walsh’s sound is created. Together they build an exciting story that explores the making of the work itself. Dickinson has worked with Maureen Whiting Company, Dayna Hanson and Zoe Scofield; Paurl Walsh has worked with Implied Violence, Degenerate Art Ensemble and X-Ray Press.

Ezra Dickinson was born in Bellingham Washington; he began dancing at the age of four. Ezra received training from Pacific Northwest Ballet for twelve years on full scholarship. Ezra earned his BFA in Dance with an emphasis in choreography from Cornish College of The Arts, while at Cornish Ezra was the recipient of The Merce Cunningham scholarship in Dance, The Kreielshimer scholarship, and The Presidents scholarship in Dance. Ezra has toured across America performing at venues such as Jacob’s Pillow, Bates dance festival, The Baryshnikov Arts center, Danspace, The Southern Theater, ODC Theater, PICA TBA, and The Sitka Fine Arts Camp. Ezra’s work in choreography, and movement installations have been on display in 12min Max, Northwest New Works Festival, Gallery 1412, Chop Sue, Act Theater, Gallery 154, Move, Ten Tinny Dances, Moore Inside Out, Heathrow Airport, Henry Art Gallery, 911 media arts center, Next Fest Northwest, SAM Remix, Art Zone, and The Northwest Film Forum. Along with being co-artistic director of The Offshore Project, Ezra is in his fifth year of dancing for the Maureen whiting Company, and is a member of The Castaways.

Paurl O. Walsh graduated from Cornish College with a degree in Classical Composition and Electro-acoustic music. He is an active composer of electronic music (including large-scale surround sound performance installations), modern classical chamber music, music for dance and theatre, and good ol’ rock and roll. Writing and performing throughout the US and Europe, he has been a core member of the hyper-experimental performance art/music group Degenerate Art Ensemble, designed and produced music for the theater group Implied Violence, and can most often be seen performing in the prog-punk outfit X-Ray Press. He also runs ExEx Audio, a creative recording studio centered around working collaboratively with artists to help them better express themselves through sound.