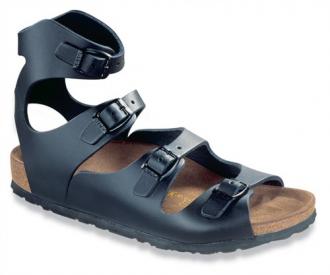 i am fairly bizarre… maybe you already knew that, but if you didn’t, there it is. one of the ways i am bizarre is that i have worn exactly the same style of shoe, more or less, for the past 30 years. when i was born, i had some congenital difficulties with my legs and feet. i don’t know very many details, but i do know that i had my right leg in a cast from the age of 6 months or so, until i was about a year old, which meant that, among other things, i didn’t crawl: i went straight from “creeping” to walking, and, thus, didn’t get the crawling that is so necessary to a normal baby’s development. i also had to wear “orthopedic” shoes and a brace at night, to “help straighten out” my feet, and i was forced to do pointless excercises (stand facing a wall, and do “push ups” against the wall, while keeping my heels on the floor) until i was about 5 or so. even with all that “help”, i managed to destroy just about every pair of shoes i owned, by “running over” them on the outside, until i found the birkenstock athens.

when i find something that works, i tend to stay with it until i have to change… that’s why i’m bizarre.

i have owned three pairs of athens sandals, one pair of brown, and two pairs of black, in the past thirty years. i have gotten them “recrafted” — which, in “birkenstock terminology”, means grinding off the rubber sole, separating the leather uppers from the old cork footbed, and putting on a new cork footbed and covering it with a new rubber sole — uncounted times. the brown pair finally bit the dust last year, when the leather straps broke. then one of the black pairs came back as “un-recraft-able” from the birkenstock repair guy, and i was in a quandary…

i had known for some time that birkenstock had officially stopped making the athens style sandal a number of years ago. in fact, the 2nd pair of black ones that i bought, i had to order them from europe, because they had discontinued the style in the united states, and that was almost 15 years ago. so when my second pair of birkenstocks came back as “un-recraft-able”, i jumped into action.

first, i called birkenstock central to make sure that they really don’t have any more, and while i had them on the phone, i asked them about making my own, using an “un-recraft-able” pair as a template. they had never heard of such an idea before, but definitely encouraged me to see if i could do it… of course i already knew that i could, but that way they can’t complain… 😉

i went to mcpherson leather supplies in the international district, and bought enough leather for three pairs of sandals (and spent all of $36… if this works out the way i think it’s going to, i’m probably going to go into the business of making obsolete birkenstocks for bizarre people). i also had the “un-recraft-able” ones traced by the birkenstock repair guy, so that i had a template.

then i cut out mirror images of the template (one for right, and one for left), which i intend to take to the birkenstock repair guy, who will put the cork, footbed, and buckles on for me, and voilá… a new pair of “athens” sandals.