1 in 10 Americans think HTML is an STD — the other day i was at a friend’s house when my phone rang. it was my mother-in-law, who very rarely calls me, but when she does, it’s usually something fairly important, so i answered. she proceded to ask me “tech-support-geek” questions (something about filtering spam, i think) and i had to remember not to use “computer geek” language when i told her the proper techniques. this is the woman who has to have the difference between a browser and an operating system explained to her, repeatedly… to give her a little credit, she does have a neurological disorder that affects her memory… but so do i… 😐 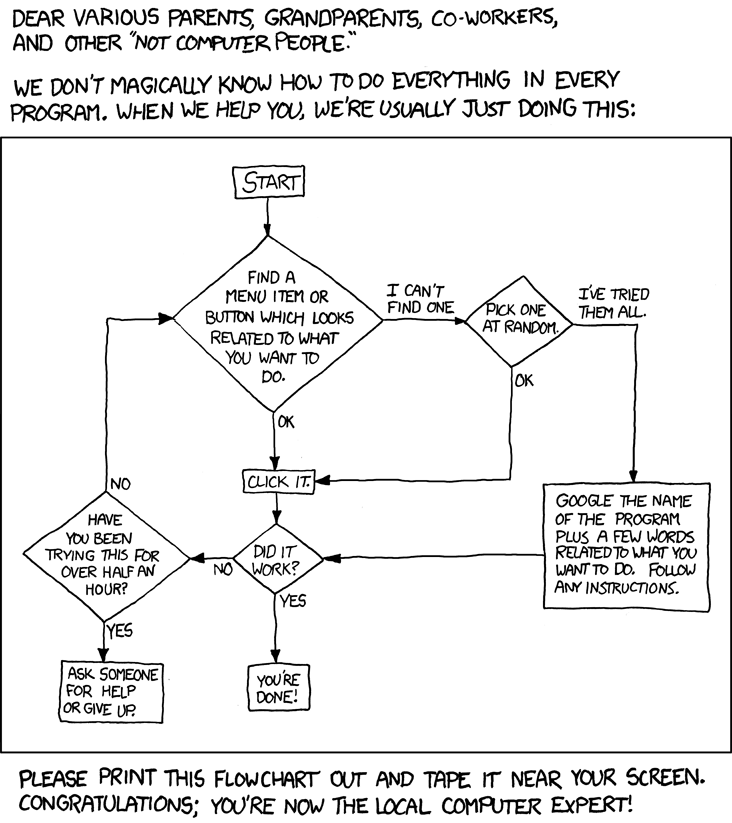 i would give a copy of this to her, except that she doesn’t understand how to read a flowchart…

If you’re talking tech with Americans, you may want to avoid using any jargon.

A recent study found that many Americans are lost when it comes to tech-related terms, with 11% saying that they thought HTML — a language that is used to create websites — was a sexually transmitted disease.

The study was conducted by Vouchercloud.net, a coupons website, as a way to determine how knowledgeable users are when it comes to tech terms.

“Technology is a huge interest for our user base, and month after month we see thousands of people visiting our site to look for coupons and deals to use when purchasing their favorite tech products,” a company spokeswoman said in a statement. “It seems that quite a few of us need to brush up on our tech definitions.”

Besides HTML, there were some other amusing findings:

Despite the incorrect answers, 61% of the respondents said it is important to have a good knowledge of technology in this day and age.

The study involved 2,392 men and women 18 years of age or older. The presenters were not told that the study was specifically looking into their knowledge of tech terms. They were presented with both tech and non-tech terms and were asked to choose from three possible definitions.

“Hence why a mix of both normal and technology-related words were used,” the company said in a statement.