the solstice festival is coming up sooner than i would have thought, so i put a coat of primer on Ganesha The Vāhana v3.0 in preparation for starting yet another, probably failed, attempt to get all 1008 names of ganesha on my car. i still haven’t decided exactly what i’m going to do once the primer dries (and, likely, gets sanded and a second coat added, because i just checked and there’s a whole bunch of places where the old coat is flaking, and/or the bare metal is showing through), but it’s probably going to be either a picture of ganesha and/or a swastika, or as many names of ganesha as i can fit, using tinier writing than i have used before… or, possibly a combination of the two…

i usually wait until there’s a week or so of good weather predicted, because i don’t have a garage, and wet paint and rain don’t mix well, but it’s getting to the point where i’m busy enough, and the weather has been wonky enough, that if i don’t get started on it soon, it won’t be anywhere close to ready by the time the solstice comes around.

along similar lines, there has been talk of getting me a new car. i don’t know whether this means a really new car, or if it just means a “new to me” car that is something from this century… which is a good thing, because the current ganesha the vāhana’s transmission is acting strangely, and OCF is also coming up sooner than i expected.

well, i thought it was amusing…

i am feeling a good deal better, although i am still not back to 100% health, yet. i still have a lingering cough that comes up at random times, particularly whenever i lie down, but i’m a lot better than i was a week ago.

the brakes in my car have to be replaced, to the tune of $800. moe claims that this car is “nickle-and-dime-ing” me, but the previous car (of which she approved) had already cost me almost $3000 by this point in our relationship, including $1500 for a replacement transmission, and this car has only cost me $450, plus the proposed brake work, and it appears, in spite of the fact that i’ve had to replace the timing belt, and now i have to get all four brakes and wheel bearings replaced, that this is going to continue to be a functional car for a lot longer than the previous one was. and, because of the fact that it’s a honda and not a ford (or whatever the previous car was, i don’t remember), i can actually take it to jack to have the repair work done for (hopefully) cheaper than edgewood tire quoted me. i’m also going to try to enlist the aid of the friend who worked on my brakes the day i had my brain injury (although, again, hopefully, i won’t have another brain injury), which has the definite possibility of saving me a good deal of money.

i got a reply from the incense people regarding the meaning of the word “pieces” and, as i suspected, it was entirely due to the fact that they were translating from hindi to english. if it weren’t for the fact that i have to think about providing at least part of the money for my car, i would already have sent the guy $100 for incense. as soon as i actually get paid for the postcards i made last month, i will probably do that anyway.

we had a recording session with a real, live, professional recording technician, last night, which went outstandingly well, and we’ve got another session with him tomorrow night, which, if it goes half as well as last night’s session did, will make a real, live CD of the fremont philharmonic a lot closer to being actual reality than it has ever been before. also, friday is a New Old Time Chautaqua benefit show in olympia, for which i have been recruited as a sousaphone player. it should be fun, if nothing else.

today is may day. everybody go home and don’t work. also, friday is Bongwater Day, for those of you who are interested. 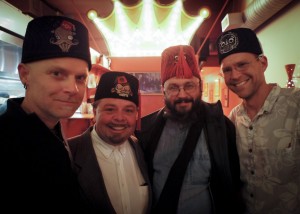 yesterday we had a fez-up (left to right: Fez-Monger, Howlin’ Hobbit, yours truly, and Henrik Van Tiki who was visiting from hawaii) and the few days of not having anything specific to do gave me the time to do some research on where to get the next step of turning ganesha the vehicle into an actual vahana for ganesha, which resulted in my getting the stereo installed today… seriously, the people at car toys wanted $400 to install it, and the people at Foss Car Audio did it for $250, but it took me three days of calling people, driving around and getting estimates… anyway, the next step is getting it ready to paint, and getting the windows ready to tint.

also, there are some photos of my wanderings in tacoma, while i was waiting for my car to be done. the photos are from my telephone, so they’re not as good quality as i’d like, but… 8)

the new ganesha the vehicle developed its first problem a couple of days ago. the speedometer quit working… and, along with that, the odometer and the cruise control quit. 😛

i called the dealer(!) i bought it from the other day, and he said he’d get back to me, but he hasn’t called yet. i just called him, and they want me to bring the car up to them tomorrow.

i’m going to bellingham on friday. i might not be back until saturday.

it goes klunk, but it only goes klunk at certain times (when i am going around a corner) and not at other times (like when i am going over a speed bump), and, upon further investigation, the spare tire holder makes a suspiciously similar “klunk” when it gets stressed from going around corners, or when the car is stopped and i bump into it… i’m not saying that this is conclusive proof that nothing is wrong, but it is a good indication. 8)

the next step, now that the license plates and the insurance is switched over, is to get the stereo and the siren speakers switched over. i called and talked to a guy from car toys a couple of days ago, and he said that he would pull my previous order, but when i called back today, he wasn’t there and won’t be back until tuesday.

after that, i need to get started on the paint job. the guys that i bought it from said that they would provide the wholesale certificate to get it painted at maaco, and all i had to do was get an estimate.

the BSSB played at the festa italiana in fisher plaza today.

and i keep meaning to mention that monday was frank zappa day… hopefully i’ll be closer the next time.

the new ganesha the car (truck?) v.3 is now on the scene!

i took it to see the mechanics at edgewood tire, and they said that, for a car with 171,000 miles on it, it looks pretty good… although one of them said that he wouldn’t buy it, he also said that it’s a much better car than the last one… they also recommended that i put straight 30-weight oil in it, because thicker oil will give me more adequate oil pressure, so i had ’em change the oil and it already sounds a lot better.

although it goes “klunk” when i’m driving around corners. moreso when i go around left corners than when i go around right corners, but still… it sounds like someone replaced the shocks and didn’t tighten them down enough, or something like that. also, it looks strangely lopsided: the driver’s side seems lower than the passenger side… that could also be because of where it’s parked at the moment. it had some “do-it-yourself” window tinting in it at some point in the past, which was removed before i saw it, but there’s a hazy film of residue on the inside of all the windows except the windshield, which has to go… and then, perhaps, some real, professionally installed window tinting would be in order… 8)

and it’s black, which means that it gets white sanskrit this time… which should look COOL! 8) and it’s got a roof that i can paint… 8)

but at the moment i’ve got a gig that i am leaving for in about an hour and a half, so i’ve got to go get ready.

not, needless to say, a NEW new car, but a new-to-me car. it’s a 1995 honda passport EX 4×4, which is significantly smaller than the humongous ford F150 pickup that i’m driving currently, but it’s still far and away the largest car i have ever owned. and it maintains my record of never owning a car that is newer than 15 years old. i’ve got to return the pickup tomorrow, so thaddeus and i are going to pick up the new car tomorrow, and then thaddeus is going to drive the humongous truck back to the issaquah highlands, where i will pick him up in the “new” car and drop him at home, hopefully before noon. meanwhiles, take a gander at the pictures of the new car from the craigslist ad: