moe is in the bedroom, watching sheep dog videos on her smart phone. one of the videos that she was watching had a whole bunch of whistling (which is how sheep dog trainers communicate with their dogs).

stanley, who is at the opposite end of the house from moe and her whistling sheep-dog videos, suddenly took great interest, listening to the whistling… it was faint, hardly audible to me, who was about halfway between moe and stanley, but stanley was listening intently…

not long afterwards, stanley started whistling exactly the same whistles that were in moe’s sheep-dog video…

fortunately, the whistles were used by someone from another country, and are not the same whistles moe uses to communicate with her dogs, otherwise there would be a distinct probability of mass confusion and anarchy among the sheep-dogs in our house.

stanley got a new toy today. it’s small enough that we have to be careful not to let the dogs get hold of it, but we’ve got a whole bag of tiny, solid “rubber duckie” toys, and stanley really likes them. 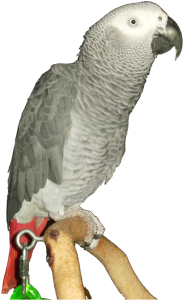 i think it was a bit hasty to assume that he’s going to have the intelligence of a 3 year old child. maybe eventually, but he’s still kind of a baby – two or three years old – and he hasn’t learned very much yet…

but he whistles bits and pieces of what is quite obviously the bach cello suite #1 in g, and he says chirp regularly… although he may have known that word before we got him…

i am SO jazzed that he’s starting to imitate me… 😀

stanley has been warming up to me gradually since we got him. he talks a lot, but the only things i’ve been able to understand are “step up”, “no bite”, “good boy” and various variations on “hey birdy birdy bird”. he’s sort of like a human kid who learns a few words before he’s sure of what they mean, so he frequently rambles without making much sense, but he steps up onto my hand without biting me most of the time now, and he takes food from my hand, although sometimes he takes the food and throws it away, and he still growls when i come too close sometimes… and he bit my finger and drew blood just a moment ago. it’s just a tiny scratch, but…

we’re training him to sing the bach cello suite #1 in G, which means that i made a recording of the suite and applied a pan flute voice to it (which is as close as i had to a sample of someone whistling), and i currently have it playing in a loop. monique’s going to start clicker-training him next week.

it’s raining and blustery today, so i can’t work on my car, which gives me some time to catch up on some other things.

moe and i are getting an african grey parrot named stanley this evening, and i’ve been fixing up a corner of the living room to accommodate him. it’s exciting, but it’s also as though we were getting a 3-year-old child, in terms of intelligence and need for taking proper precautions. moe has been wondering how long it’s going to be until stanley learns how to bark like magick, and conversely, wondering how long it will be until he learns to yell at magick for barking… which, i suppose, is just as valid as me wondering how long it’s going to be before stanley learns to make the jews-harp noise, or the tuba noise, or the flex-a-tone noise, or the glass-marble-in-a-bottle noise, or any one of a number of other noises which usually results in one or more of us yelling at magick to quit barking and be quiet. moe says that parrots are kind of like kids, in that they’ll quiz you to find out what they shouldn’t do, and then focus all their time and ability to doing that very thing. exciting is one way of putting it.

i got a phone call(!) from india(!!) this morning, from a guy who wants me to consider becoming a customer of his enterprise, which is the manufacture and export (from india) of incense, murtis and other hindu/hippie stuff. i’ve gotten a number of email inquiries like this in the past, and while i generally delete them without responding, i perked up when this guy said that he could get aparajita. i still don’t know in what quantities or for what price, but this is a lot closer than i’ve ever gotten before, and if i play my cards right, it could mean a lot more than just aparajita, as he apparently also has lines on narmada shivalingams and rudrakhsha beads. 8)

3D printer could build moon bases – somebody’s finally taken this concept to a logical conclusion, and wouldn’t you know, it had to be an artist.

Burials in Tibet – the original headline included the words "not for sensitive souls"… it shows how a different culture chooses to honor those who have died. what’s wrong with that?