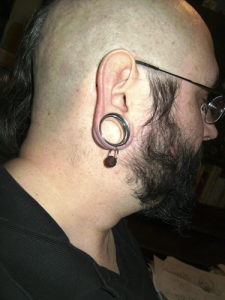 i subscribe to this blog, pharyngula, which is written by professor p. z. meyers. he is a prominent evolutionary biologist and athiest whose rantings about “christianity” and the anti-scientific are the primary reasons why i read his stuff, although i freely acknowledge that the only reason i find him amusing and not childishly disgusting is because he’s not making fun of me, and i have no doubt that he would make fun of me if he knew that i exist. nevertheless, his rants about chiropractors and acupuncturists have gotten to me on several occasions, and i was going to ask my acupuncturist about it when i saw him today, but before i even remembered to bring it up, he mentioned something that convinces me even more that amusing as p. z. meyers is, he doesn’t come close to knowing everything, and about “mystical” stuff he is hopelessly clueless and will likely remain so for the rest of his life. 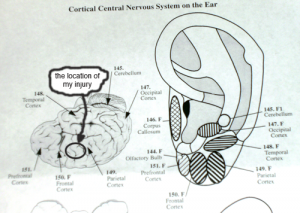 what he brought up is the fact that i have been expanding my right earlobe for the past year and a half (i actually stopped about 6 months ago because my wife doesn’t like it). he’s been studying auricular acupuncture recently, and has noticed that a lot of people self-treat with piercings and modifications without realising it. he then showed me this page from his auricular therapy manual. i may agree with p. z. meyers about the perils of “christianity” and “intelligent design”, but this, if nothing else, convinces me that there are a lot of things that science knows about and dismisses as unproven, that are just as real as things that you can hold in your hand. clarke’s law: any sufficiently advanced technology is indistinguishable from magic.